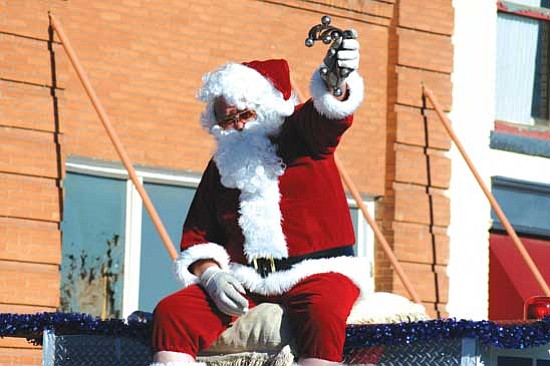 WINSLOW, Ariz. - Experience "The Joy of Giving" during the 64th Annual Christmas Parade in Winslow on Saturday. Daylong events include the sale of food, arts, crafts, toys, clothing and jewelry throughout Winslow. The parade begins at 1 p.m. in downtown Winslow, kicking off this year's holiday season with fun and joy.

Thousands flock to Winslow from all over the state annually, and this year's event is expected to draw record numbers. More than 100 parade entries are expected to enter.

The theme of this year's parade is "The Joy of Giving."

This year's Grand Marshal is Charles McLaws, who will be honored for all of his contributions to the community.

Santa and Mrs. Claus will be at the Visitor Center, 523 W. Second St., 10 a.m.-noon. Santa will be talking to kids, seeing what all the children want for Christmas.

Winslow Chamber of Commerce officials are adding a new twist to this year's event. There will be several drop off areas located throughout the parade route for non-perishable food items and toys for deserving families during the holiday season. Suggested donations include can goods, potatoes, flour, sugar and anything that a family would enjoy during the holidays. Drop off locations include Simmons Realty, Pioneer Title and Winslow Dental.

The Chamber will gather all donations, divide them up and then offer them to various charitable organizations throughout the community. Your donations are sure to brighten the season for many while enhancing the theme of this year's parade. By participating in this endeavor, you will experience firsthand "The Joy of Giving."

Parade entries are still being accepted. Numerous classifications of entries are encouraged to enter including bands, dance, dignitaries, equestrian, floats (non-profit, youth and commercial), military, Shriners, vehicle and walking. All entries must be registered at the line-up location west of the Hubbell Building on Second Street by 12:15 p.m. Saturday. The parade will end at the Visitor Center. Please remember that canned party spray, spry string, poppers or other pressurized items are strictly prohibited and are not to be sold or used near the Christmas parade grounds or staging areas.