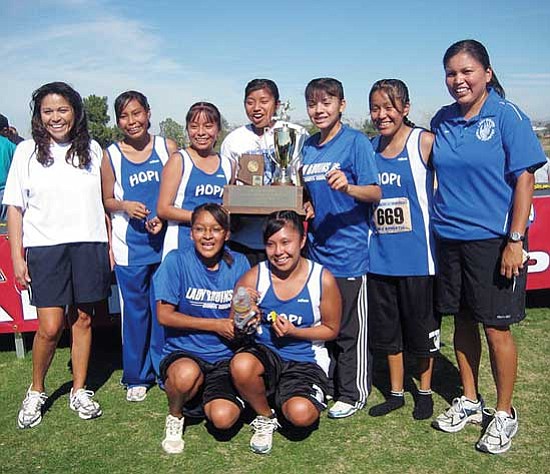 Chelena Betoney from Valley-Sanders was the individual state champ with a time of 19:36, far ahead of Northland Prep's Andrea Klimowski who grabbed second.

Hopi High Coach Laverne Lomakema said the girls came out and ran with all their heart. This is Lomakema's second year as head coach as she follows the tradition set by Coach Harvey Honyouti.

Coach Lomakema said the Lady Bruins overcame a lot of illnesses and injuries to get to state. "But we ran a smart race," she said. The key was that the girls gave it all they got and we ran as a pack."

Coach Lomakema said several of her runners did not run well at regionals where the Lady Bruins finished second to Northland Prep.

"That just got the girls more motivated," she said.

Coach Lomakema credited Josytewa for leading the way. "Terrisa ran the race of her life," she said.

The Lady Bruins will lose four seniors to graduation. Lomakema said she thanks the parents and supporters for their help because "they make a world of difference."

Josytewa said it felt good to win state because as a senior this is her last year and she spent it well with the other girls.

"This year seemed less competitive because we didn't run against Northland Prep until regionals," she said. "At state we had a more positive mind. I thought about past runners, especially Monica Honyumptewa, so for my last race I was able to give it my all."

Josytewa said Hopi High ran a good race, although most of the runners felt that they could have finished higher. She added that the key to winning state was their attitude.

Josytewa has been active in student council, cheerleading, Hopi Sinom and American Indian Science and Engineering Society. She plans to major in athletic training and run cross country at Central Arizona College.

Antone, a sophomore, said it felt good to win state and it was special to her since it her first year running. She said both the team and herself ran well. Last year, she went to state as an alternate. This year she made it clear to her coach that she wanted to run at state.

Antone said she was able to run better in Phoenix despite the heat.

"I didn't think we were going to win because everybody was so close and we were right behind each other," she said.

Antone said the key to winning was running as a pack and working hard during every practice.

"We encouraged each other to work hard," she said.

Antone, who plans to play basketball, will run every day during the summer to stay in shape.

"Congratulations to the team. We did it once again. Hopefully we'll do it again next year," she said.

Gilmore, who has the nickname of runner girl, called winning the state championship an unbelievable success.

"It was the best feeling I have ever had. I was so thrilled to be a part of such a great team," she said.

Gilmore transferred to Hopi High from Westwood High School where she didn't run. She previously earned medals in elementary school and then at Jeddito Junior High. She said running at Hopi High taught her discipline.

"Hopi High ran a really good race at state. It was our best race of the year," she said.

Although it wasn't her best race of the year because she was still rebounding from shin splints and an achilles strain. She added that she could have run better if she had been more hydrated throughout the past two weeks.

"We started the race as champs and finished as champs," she said.

Gilmore plans to major in aerospace engineering at either NAU or ASU.

Humetewa, a sophomore, said it was awesome and a great feeling to win state again. She finished fifth last year, but some flu-like symptoms hurt her this year. She said the Lady Bruins ran a good race by keeping up with Northland Prep.

Humetewa said the weather was cooler and better than last year. She said the two point championship was nerve racking because nobody knew who won until it was announced.

"The key was getting our top runners in front and running the last mile strong," she said.

Humetewa said next year she will work harder and try not to get sick in order to help her team.

Humetewa, who plans to play basketball, is in Gifted and Talented.

"Congratulations to all the girls. I hope we do well next year. We'll work hard and stay positive," she said.

Lucas, a sophomore, said winning state was incredible because it was her first year running with the team.

"My teammates helped get me through the impossible," she said. "The team made it a dream to where we became champs."

Lucas said the Lady Bruins ran a good race because they ran with confidence and hope. She said the heat was exhausting and she thought that Hopi lost until the winners were announced.

"Everybody was saying that we could have done better," she said. "The key to winning was everybody working hard and having faith."

Lucas said next year she will train as hard as she can to catch up to the top runners. She also plays basketball and softball.

"Good job to the team. We did it with a lot of effort. We put a lot of love and faith into it," she said.

Mansfield said winning state three straight times was cool. She said the team was different this year because of the new runners who joined the squad. She credited her teammates with running a good race at state.

"We all did well, but we could have done better. I know I could have prepared more," she said.

Mansfield said she was surprised when the Lady Bruins won. She didn't think they had a chance because most of the Northland Prep runners passed her. She added when the officials setup the trophies that Hopi's and Northland Prep's trophies were so close together they couldn't tell who the winner was until it was announced.

Mansfield said the key was running hard and sticking together as a group.

"We worked on that all year," she said.

Mansfield is active in the senior class and running club. She plans to major in education or something in the medical field at Haskell College in Kansas.

Polacca, a sophomore, said she was so excited about winning state that her feelings were mixed up and she didn't know what to think. This was her first time running at state, but she thought the Lady Bruins ran a good race because they were all packed together.

Polacca felt she ran a good race because she stayed close to Hopi's sixth runner. She was not used to running on a grass course, but she liked the course because it was relatively flat.

"It was hot, but that didn't get to me," she said. "We packed together and we were passing people at the end. Jasmine pulled it out by passing two runners at the end. We also ran the last mile like we never ran before."

Polacca said she will train every day to prepare for next year to improve because she wants to finish in the top five. She also plays basketball and remains active in Gifted and Talented.

"Good job to the girls and I'm proud of them," she said.