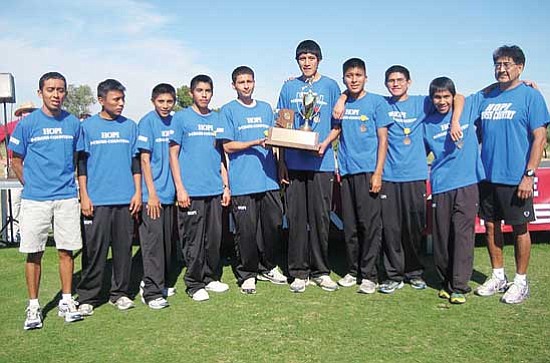 Tombstone's Cody Rosengarten was the individual state champ with a time of 16:09. Hopi's Kyle Silas was behind him in 16:18 and teammate Ronald Laban was third. Garriott James from Many Farms claimed fourth before Hopi's Justin Secakuku finished fifth.

The remaining members of the Hopi High state championship team were Brannon Sidney, eighth; Mccray Huma, ninth; Clayden Torivio, 17th; and Kevin Tsiniginnie, 24th. There were 131 runners and 18 teams in this race.

"Now we're down in history. It shows the kids are motivated," he said. "It means a lot to the Hopi Nation to win 20 in a row. It's an amazing record."

Coach Baker said Many Farms gave Hopi High a scare last week at regionals when they came in second. He credited Silas with running a good race and improving since midseason.

"Kyle couldn't take first, but he pulled the team through. He put pressure on himself because he's been on four state championship teams," he said.

Hopi High is losing five of seven runners to graduation, but Coach Baker said with two returners and a strong junior varsity that the Bruins should be strong again next year. He added that the Hopi High runners were more concerned about the team title than any individual goals.

Coach Baker said Hopi High started the season strong, hit a wall for about three weeks during midseason, but then regrouped and finished strong.

Silas said he was shocked and amazed by his high finish. For most of the year, Laban was Hopi's top runner but Silas emerged as the 2A North Regional Champ before grabbing second place at state.

"I just thought positive and stuck with Cody," he said. "I ran a better race because I put in all my effort."

For his strategy, Silas didn't start too fast and gave an extra kick down the final stretch.

"I was amazed that every Hopi High runner did their part," he said.

Silas said he committed himself to running much more this year than last year.

Silas, along with his teammates, said state was not that challenging this year because they dominated the meet. His advice for next year's cross country runners is that they should stay strong and not let anybody pass them.

Silas, a senior, plans to major in sound effects or architecture at Ft. Lewis or Northern Arizona University. He will also play basketball and run track this year. He hopes to run cross country in college.

"I want to thank everybody for their support throughout the season," he said.

Laban said it was good that Hopi High cross country was able to continue the winning tradition.

"It felt good that we didn't lose the streak, but we knew we would win because we do well at big races," he said. "We're just better than the other teams."

Laban said this year was different than past years because there were more returners to the squad.

"We had a good strong team," he said. "We had a good race. We started off fast. We showed that we were going to dominate from early on."

Laban said the key to winning was preparation throughout the season. He is active in the senior class. He doesn't know where he wants to go to college, but he is committed to going to college.

Justin "Vava J" Secakuku said words could not explain how great it was to keep the tradition going for the Hopi Nation, Hopi High School and the student body.

"Our mentality was different this year. Our synergy was better and we were more focused," he said. "We executed efficiently and we were all on the same page."

Secakuku said Hopi High boys ran a phenomenal race with Hopi's top five finishing in the top nine. He added that he enjoyed the race because the weather was a lot nicer than last year. He said the key to winning was believing in their goals, their training and Coach Baker.

As a junior, Secakuku will be one of few returners for next year. He said they will continue running and stay in shape.

"We have high hopes. As long as we put in the work we'll have a phenomenal team," he said. "We have a strong group of underclassmen.

Secakuku runs track and plays basketball. He is vice president of National Honor Society. He plans to major in criminal justice but hasn't selected a college yet. He hopes to get cross country and academic scholarships.

Brannon Sidney said he felt awesome to be part of two decades of state championships.

"It was fun because most of us were seniors and we made cross country enjoyable," he said. "Everyone ran to their potential. I ran pretty well, but I could have improved by keeping contact with my teammates."

Sidney said the weather was nice and cool so it made him feel light and not exhausted. His advice to incoming runners is to keep in contact with each other during the race and encourage each other.

He will also run track. He is active in National Honor Society, student council, Close Up and radio. He plans to major in hotel restaurant management. He is hoping to get a cross country scholarship.

"I never knew this was going to happen and fall in my lap," he said. "Now I have to take advantage by getting my best times. I'm looking forward to being a leader next year."

Huma said running in the state meet for the first time was great. He got tired, but was able to give a little extra at the end. He was proud of his fellow runners.

"Everybody improved and stepped up to do their part. We passed all the runners we needed to pass," he said.

Huma said the key to winning the race was Hopi's fifth runner and beating Many Farms' top runner.

In preparation of next year, Huma said during the summer he will run longer, improve his wind and work on his muscles. He also plans to run track.

"I hope the team will be better next year. We'll run hard to bring home the 21st," he said.

Torivio said he was proud of his fellow runners and their cross country spirit. He finished 31st at state last year so he was happy he was able to move up to 17th this year.

"I missed getting the medal by three last year so I really wanted to get it this year and I went for morning runs this past year," he said. "I also lifted weights and tried to keep up with Wunu (Sidney)."

He is active in National Honor Society, student council, Close Up, Academic Decathlon and American Indian Science and Engineering Society. He also plans to run track.

"Congratulations to the boys and girls. We did well our last year and now all we have to look forward to is track," he said.

Tsiniginnie said he felt good about Hopi High winning its 20th straight state title because not many teams could do that. He said he could have done better this year if he had run more during the summer.

"But the team ran a good race with five in the top ten," he said.

Tsiniginnie said the key to winning was the Hopi High runners sticking together in a pack and making each other work harder. He plans to play basketball and either track or baseball.