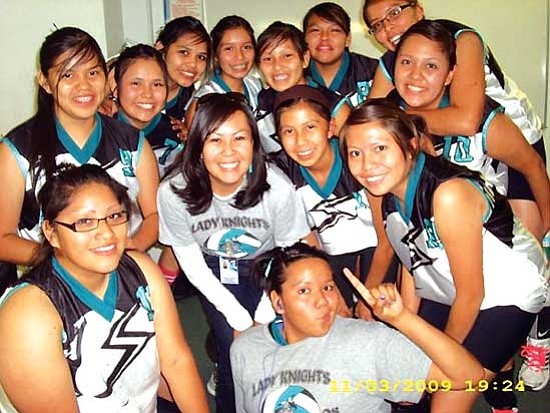 TUBA CITY, Ariz. - On Nov. 6, Greyhills Lady Knights volleyball team completed a remarkable season by going into the second round against the Miami Lady Vandals in the 2A Arizona State Girls Volleyball Championships. The Knights matched up well against the Vandals only to lose a close game, (33-31, 16-25, 25-17, 9-25 and 15-10). The Knights finished the season 13-8 overall but fared well in conference play, going 12-1 losing only to Williams High School.

Greyhills hosted the first round of the playoffs on Nov. 3. The Lady Knights, at #9, defeated the #12 Phoenix Christian Eagles in four matches (25-16, 25-16, 23-25 and 25-17) to advance to the second round to match up against #8 seeded Miami Vandals. With the majority of the last season's starters returning, Coach Adaline "Lacy" Tsingine had high expectations from the beginning of the 2009 season.

"I told the girls they have every opportunity to do well this season and end on a high note, to coach this group of young ladies has been an honor, we learned from one another at one point or another throughout the season," she said.

In prepping for the first round, coach Tsingine said she grouped the girls together to highlight key points for the game.

"I wanted them to dominate from the beginning and keep the intensity going throughout the match," she said.

The strategy proved successful against Phoenix Christian. Trekking into uncharted territory, they moved into the second round of the playoffs to face the #8 seed Miami Vandals. With a valiant effort, the Lady Knights fought a five game set, although in a losing effort.

"It was a bittersweet outcome to know our girls played their hearts out" Tsingine said.

Knights Libero, Sasha Dalton a sophomore said, "I was getting ready, trying to prepare. Then game time came around, I was mentally and physically ready for it (game). All I have to say is we gave it all we got."

In her second season as head volleyball coach, Lacy Tsingine was named the 2009 2A North Coach of the Year.

With all three teams finishing strong (Freshmen 3-1 and the Junior Varsity 15-3), the Lady Knights hopes that this year's playoff experience will be a motivating factor for next season's team.

"The bar has been set and next season, my expectations are going to be even higher for the girls to advance more into the playoffs," Tsingine concluded.