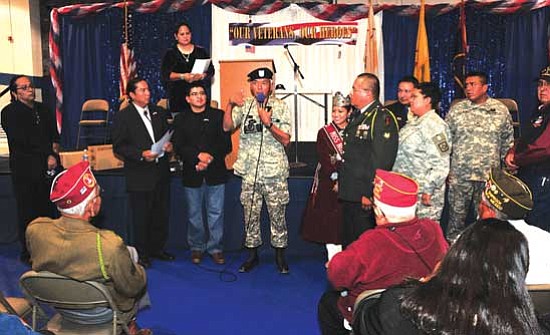 SHIPROCK, N.M. - Last week on Veteran's Day, Diné College hosted a special day of appreciation activities entitled "Our Veterans, Our Heroes." Amid a veteran motorcycle run, gun salute, taps, speeches, flag presentations and a traditional Navajo meal, veterans from around the Navajo Nation representing all branches of the military were honored.

Diné College President Dr. Ferlin Clark recognized and thanked the veterans and active service men and women who were present including Diné College veterans. At 11:00, he led a moment of silence for veterans and the army casualties from the recent Ft. Hood shootings.

Jim Dumont, representing Senator Jeff Bingaman's office read a letter from the senator, praising and recognizing the Navajo veterans. The letter included an announcement from President Obama of a $25 billion increase in veteran benefits. Dumont concluded his remarks by telling the participants not to limit their respect to one day but to show respect and gratitude for our veteran heroes all year long.

Ron Belolli, an Army veteran of the Viet Nam era and Vice President of Administration and Finance for Diné College spoke to those in attendance and asked the question "What is a soldier? What are we? Humans with strengths, personal beliefs and traditions." Belolli said when he left home to serve, he had never been on a plane or train before.

"We are sons and daughters, husbands and wives. We followed orders even when we disagreed. We endured boredom and it wasn't glamorous. We remember those who died and wonder how we got through it. We cherish those we served with. We are reluctant to accept benefits and don't like to admit we can't handle things ourselves. We are quietly proud we served. To those of you who have served I honor you and appreciate you," he remarked.

The attending veterans were then asked to come forward and accept a certificate of appreciation and veteran ball cap from Diné College. These were presented by President Clark and presiding officials. Each of the veterans was allowed to speak to the visitors and spectators of the event. Flag songs and honor songs were provided by the Southern Outlawz drum group.

A delicious traditional Navajo dinner was then served to the veterans and participants.