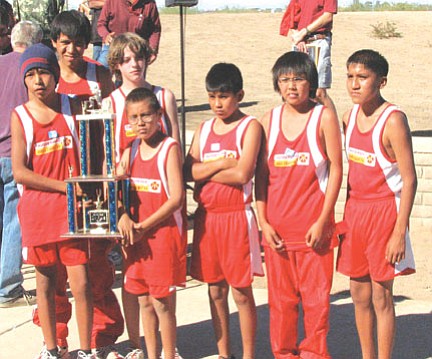 GOODYEAR, Ariz. - The Lady T-Bird's of Tuba City are once again victorious as they take the state title for the second consecutive year. These talented young athletes made their mark again at the Junior High State Cross Country meet on Oct. 31 at Estrella Mountain Park.

There is no doubt that these young runners felt the thrill of triumph to be the best in the state. They definitely earned their position through excelling dedication and having discipline in both academics and athletes. The T-Birds trained hard making the best of their last race of the season resulting in winning the state title.

The boys' varsity team was also committed to run hard each day. As a result, they had an outstanding record as they closed their season being undefeated.

"We are exceedingly proud of these fine athletes, you couldn't have asked for more," said Coach Coolie.

Members of the boys' varsity runners include: Kyle Hardy, Eddie Loughran, Kyle Sumatzkuku, Yazzie Goodman, Albert Fuller and Lance Fuller. These fine young gentlemen concluded their season at the state meet as runner up, scoring 103 points and losing by only six points to Chinle. It was a heartfelt and unforgettable experience for the runners after having an undefeated record. However, in the end it was a huge success for the team in understanding the skills and self-confidence it takes to compete at a state level.

The cross country team consisted of team A boys and girls and team B boys and girls. All four teams had the opportunity to run at state. Both A and B girls' and boys' teams have worked consistently all season long.

For the coaches, there was nothing but a feeling of excitement, nervousness, and a feeling of awe when runners come into that finish line. Coach Coolie was quite appreciative of all the runners at the state competition with only a few words spoken - "How sweet it is" as the athletes received the state medals, trophies and the Winning Coach Award from the Arizona Junior High Athletics Association.

The teams want to thank all the fans because that have made a difference for the runners, especially T-bird grandparents, parents, school officials, and other supportive people. The team achieved and represented to make everyone proud. As a team, they continued to push toward the goal from day one of practice and always moving on to the next level of skill and competition.

Long distance running is quite a test for some because it's a mental challenge and just as much as a physical test of strength. Many of the runners had to find their inner strength and willingness to run longer and increase their speeds.

The Thunderbird Cross Country team did just that and kept that stability during practice to make winning magic happen during another fabulous season.