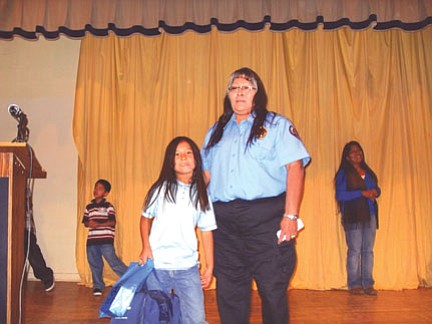 HOTEVILLA, Ariz. - The Hotevilla-Bacavi Community School (HBCS) celebrated its drug and alcohol free posture by participating in a number of activities during the recent week long observance of Red Ribbon Week.

Red Ribbon Week is the nation's oldest and largest drug prevention program which was initiated to honor DEA agent Kiki Camarena, who was killed in a drug bust activity in 1985.

With assistance from former First Lady Nancy Reagan, over 80 million people observe Red Ribbon Week with the cooperation of local school children in raising local awareness of the dangers of alcohol and drug abuse and what they can do to lead habit free lifestyles.

Debra Baker, the Substance Abuse Technician for HBCS, also served as the coordinator for the Red Ribbon week activities, which included a poster contest.

Third grader Jaeda Honanie took first place in the contest. She stated, "I was thinking about Kachinum. I know they want us to behave and be good. I also don't like it when people are drunk, because they could end up at the hospital and people sometimes die."

Sponsors for the HBCS events were HOPI Substance Abuse Prevention Center and the Hopi EMS.