Editorial: Thank a veteran for the freedoms we enjoy today 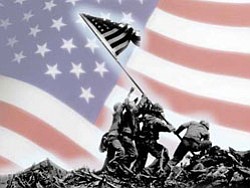 Today, many local and area businesses will be closed in honor of Veterans Day. Many will have the day off to reflect on the significance of this holiday. Our esteemed veterans - those who fought for the freedoms we enjoy and often take for granted today - deserve our thanks.

President Woodrow Wilson proclaimed Nov. 11 as the first Veterans Day in 1919. World War I officially ended when the Treaty of Versailles was signed on June 28, 1919, in Versailles, France. Fighting had ceased seven months earlier when an armistice between the Allied nations and Germany went into effect on the 11th hour of the 11th day of the 11th month. For that reason, Nov. 11, 1918 is generally regarded as the end of "the war to end all wars."

Nov. 11 was thus commemorated as the first Armistice Day with the following words: "To us in America, the reflections of Armistice Day will be filled with solemn pride in the heroism of those who died in the country's service and with gratitude for the victory, both because of the thing from which it has freed us and because of the opportunity it has given America to show her sympathy with peace and justice in the councils of the nations..."

Originally, the day was to be celebrated with parades and public meetings. Business was to be suspended briefly at 11 a.m. In 1938, Armistice Day was approved as a legal holiday set aside to honor veterans of World War I. Following World War II, which required the greatest mobilization of soldiers, sailors, Marines and airmen in the Nation's history, and after American forces had fought aggression in Korea, Congress amended the Act by striking the word "Armistice" and inserting the word "Veterans" to honor veterans of all wars.

In 1968, the Uniform Holiday Bill was signed to ensure three-day weekends for federal employees by celebrating four national holidays on Mondays, including Veterans Day. The intent was that these extended weekends would encourage travel, recreation and cultural activities. Many states did not agree with the decision and continued to celebrate holidays on their original dates.

Veterans Day returned to Nov. 11 in 1978 after President Ford signed Public Law 94-97 in 1975. The restoration preserves the historical significance of the date, helping us focus on the purpose of Veterans Day - a celebration to honor America's veterans for their love of country, patriotism and willingness to serve.

This year should be especially poignant because we, as a nation, lost several members of the world-renowned Navajo Code Talkers earlier this year, including John Brown Jr., Thomas Claw, Willie K. Begay, Matthew Martin and Willard Oliver. They deserve to be remembered for their sacrifices to this country. Let us also continue to honor the memory of Lori Ann Piestewa, a mother of two who also gave the ultimate sacrifice for her country. Let us continue to honor the memories of those who were lost.

In addition, let us honor the many mothers, fathers, brothers, sisters, aunts, uncles, cousins and other relatives who are presently fulfilling the legacy of our ancestors by protecting our homelands from those who seek to bring us harm.

All of our veterans - living and deceased - should be saluted not just today, but every day of the year for the sacrifices they valiantly made on our behalf. Today is their day. Please take the time to honor and thank a veteran for the freedoms you continue to enjoy today.