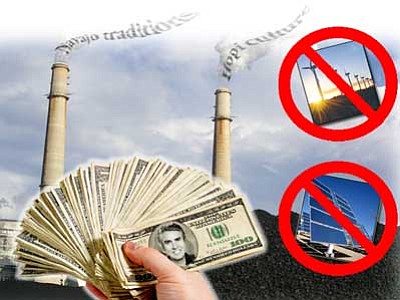 Over the past few weeks, both the Navajo and Hopi tribes have been embroiled in seemingly endless internal bickering and logistical battles in what many view as piteous efforts to gain some degree of control over their respective autonomous governments. It is clear that both Navajo and Hopi tribal members have grown tired of this and want everything resolved sooner rather than later, although there is still quite a bit of contention and division between those who support the government and those who don't.

The primary issue at hand seems to be whether or not the respective governments of the Hopi and Navajo nations have the right to decide on behalf of their constituents whether or not to continue with their efforts to fill tribal coffers with funds obtained from the sale of coal and continue supplying the needs of huge, metropolitan, energy-hungry communities like Phoenix and Las Vegas with coal-based energy, or transition to an economic infrastructure that would be funded by cleaner "green" energy.

A few weeks ago, the Hopi Tribal Council took action by issuing a resolution to exclude all local and national environmental groups from Hopi lands because they felt that they were only out to represent their own interests. Yet, in doing so, they also (un)intentionally excluded a number of Hopi and Navajo individuals who would be affected by these actions.

In the resolution, the Hopi Council purported that environmentalists have deprived the Hopi Tribe of markets for coal and have thereby affected coal revenues the Council strongly feels are needed to sustain government services, provide jobs for tribal members and ultimately safeguard Hopi culture and tradition. With the closure of the Mohave Generating Station in 2005, the Council claims that between $6.5 and 8.5 million in revenue have been lost.

Yet, many Hopi tribal members seem to be in support of incorporating green energy initiatives, such as wind and solar, but the Hopi council contends that it would take green energy initiatives too long to earn as much revenue as the monies currently being generated from the sale of coal. Hopi tribal leaders remain adamant that they would be unable to operate should efforts by local and national environmental groups to shut down the Navajo Generating Station - the Hopi Tribe's only remaining coal customer - go forward as planned.

On the Navajo side of the equation, President Joe Shirley Jr. continues to seek the support of his Navajo constituency for the proposed Desert Rock Energy Project located in the Four Corners region of New Mexico. Despite his claims that the Navajo Nation "fully supports" these efforts and that the project will continue as planned, a tiny, but defiant group - Dooda Desert Rock - remain steadfastly in opposition to any and all efforts to continue with this project.

President Shirley maintains that the Desert Rock Energy Project will bring in much-needed revenue for the Navajo Nation and strengthen the Navajo Nation's economy by providing jobs and income to Navajo tribal members, but all those in opposition to President Shirley have stated quite bluntly that he has essentially "sold out" Navajo culture to big business, all in the name of the Almighty Dollar.

What it all boils down to is that banning environmental groups from tribal lands is simply a reactive and temporary "Band-Aid" solution, which doesn't even begin to address the problem at hand. In the midst of myriad efforts to protect what precious little natural resources we have left throughout Indian Country, Hopi and Navajo leaders - despite centuries of teachings from our ancestors - are now looking at the world through money-colored glasses and therefore have their eyes on the wrong kind of "green."