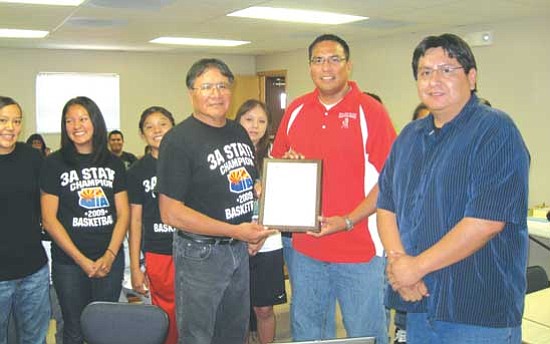 With the help of videoconferencing equipment, Navajo County Supervisor Jonathan Nez (right) recognized the 3A State Champion Monument Valley Lady Mustangs basketball team simultaneously in both Holbrook and Kayenta during the Board of Supervisors meeting on May 26. Pictured from left to right are Coach Robert Nash, Monument Valley High School Athletic Director Jacob Holiday and Supervisor Nez.

KAYENTA, Ariz. - With the help of videoconferencing equipment, Navajo County Supervisor Jonathan Nez recognized the 3A State Champion Monument Valley Lady Mustangs basketball team as well as staff from the Navajo National Monument simultaneously in both Holbrook and Kayenta during the Board of Supervisors meeting on May 26. Nez honored the Lady Mustangs for their victory in the 3A state championship game, and recognized the Navajo National Monument for its centennial celebration.

Nez made the recognitions from the County Justice Court in Kayenta while the other four Board members observed from the Board chambers at the Holbrook Complex.

"This technology is a real blessing," Supervisor Nez said. "Thanks to the other Supervisors for supporting the technology."

Supervisor Nez said that as an alumnus of Monument Valley High School himself-class of '93-it was a proud moment for him to see the Monument Valley Lady Mustangs take the title of 3A basketball champions in Glendale on March 7.

"This proclamation is to approve May 26, 2009 as the day of the Lady Mustangs," said Supervisor Nez. "These young ladies took the title back to Monument Valley. They deserve it."

He then invited Nash and Holiday to say a few words to the crowds assembled in Kayenta and Holbrook.

"It's been a real experience to see how the team grew together," Holiday said. "We extend our thanks to our school administration and the support they offer to their student athletes." Also in attendance was the Principal Gillian Vormittag.

After recognizing the basketball team, Supervisor Nez then presented a proclamation recognizing March 20, 2009 as the 100-year anniversary of the Navajo National Monument.

"These are very important times today," he said. "The Navajo National Monument is in my district, and I have a vested interest in its continued success."

He then invited Superintendent Skinner to say a few words.

"We're pleased to be able to accept this proclamation," Skinner said. "We will be celebrating through this year our 100 year anniversary, with a special celebration on June 20. We invite any and all of you to join us."