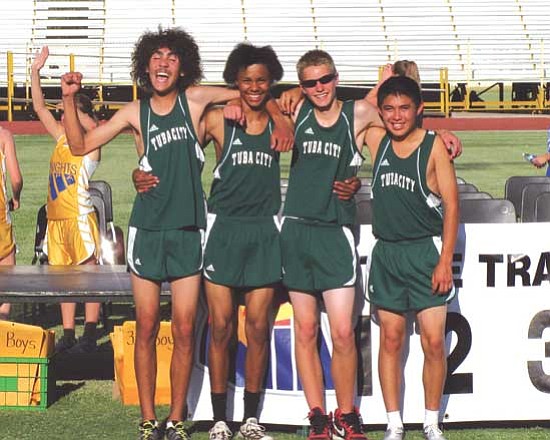 MESA, Ariz. - At Arizona's 3A State Track and Field Championships on May 15-16, Ryan Yazzie and Billy Orman scored 48 of Tuba City's 54 team points, placing Tuba City's boys in sixth place in the 28 team Arizona 3A Conference.

Tuba City's distance runners set the tone early with a strong victory in the first track event of the championship meet - the 4x800 meter relay. Having graduated no one from their 2008 squad, defending state champion Sedona Red Rock was expected by many to win again.

Tuba City junior Herschel Lester led off for the Warriors with an excellent 2:04.5 first leg sprinting into 2nd place over the final meters. Freshman high jump specialist, Matthew Murray, ran the second leg in a personal best 2:09.3, keeping Tuba City in contention for a win.

When Orman began the third leg of the relay, he was at least 30 meters behind the leader, but his 1:58.4 split turned the deficit into a comfortable lead by the time he handed of to Yazzie running the anchor leg.

With no one graduating, next year the Warriors could threaten the 3A State Record of 8:03.59 set by Safford in 1996.

Later that evening in the 3,200-m run, Tuba City's distance runners were once again facing a defending state champion and pre-meet favorite.

Senior Larry Hermance of Chino Valley won the 2008 state title, and was favored to repeat based on early season times that ranked him among the best distance runners in the southwest. As he did in 2008, Hermance took the lead early, but this time Orman refused to yield ground.

Lap after lap the sophomore from Tuba City ran a stride behind the defending champion. Even Yazzie seemed unable to maintain the pace as he fell as far as 20 meters back.

Just past the halfway mark, Yazzie made a move to close the gap on the leaders, but as he regained contact Orman made his move to take the lead.

Yazzie followed Orman's move quickly passing Hermance. For the final three laps it was a two-man, Tuba City race. At the bell for the final lap, Orman had built a 10 meter lead, but Yazzie began sprinting with 300 meters to go. Yazzie passed Orman at the top of the backstretch, and opened a gap on Orman. Orman was not finished, and closed the gap again on the final turn. On the homestretch Yazzie and Orman sprinted a stride apart with Yazzie's time of 9:28.89 winning by less than a half-second ahead of Orman's 9:29.35. Cody Wells of Snowflake ran 9:55.41 to finish well back in third, but ahead of the broken Hermance who fell to 4th in 10:00.96. Tuba City's Herschel Lester smashed his personal best running 10:15.63 to place 9th, missing a medal by just one second.

In Saturday's competition, Yazzie was the narrow favorite to win a star-studded 1600m run - the metric equivalent of the mile. The usual cast of contenders included Orman, Wells, and Hermance, as well as Garrett Debs of Sedona, outstanding freshman Johnathan Yazzie of Chinle, and Nathan Ball of Safford. The sentimental favorite was senior Cody Wells of Snowflake who had finished 2nd or 3rd in at least six previous state championship races, and in the top five at least nine times, but was gunning for his first individual title. With 49 second 400m speed, Wells seemed determined to control the pace of the race early to utilize his finishing speed at the end of the race. At the gun Wells charged to the lead, then promptly slowed the pace down to a comfortable 67-second first lap. The entire field bunched up behind, with Yazzie boxed in the middle. Just before the halfway point, a tiny opening emerged; Yazzie scooted through and moved into third behind Wells and Debs. On the third lap, Debs then Hermance ran to the front opening up a small gap. Just before the bell for the final lap, Yazzie moved past Wells into third. With 300m to go Yazzie roared past Debs then Hermance, expanding the lead with every stride. Yazzie ran a 59.1 second final lap to win in 4:20.96 - just over a second off the 3A state record of 4:19.52 set by John Tenakhangva of Monument Valley in 1991. Wells sprinted to a personal best 4:25.56, which added just one more disappointing second place medal to his pile. Hermance placed third (4:26.16), Debs fourth (4:29.39), and Orman 5th (4:31.42). Tuba City's Lester ran a personal best 4:41.23 to take the final medal in 8th place, just behind Chinle's Johnathan Yazzie in 7th (4:39.84).

An hour and a half later the same cast of stars were competing to dethrone another defending state champion - Jesus Rivera of Sedona in the 800m run. In 2008, Wells was recovering from the flu, and was narrowly beaten by Rivera. In 2009, Wells was the narrow favorite over Rivera in a competitive field of six 3A athletes that had run 2:01 or faster during the season. Although Tuba City's Yazzie had never run under 2:00 in the 800m, the entire field feared him. When the starting gun fired, Rivera bolted to the lead using the same tactic that won him the race in 2008. Wells tucked into 2nd place throughout the first lap. It appeared that Yazzie had finally run out of gas as he finished the first lap of the two-lap race in last place. Yazzie's signature move is blazing speed at the finish, but with 200 meters to go he was still in 6th place. The doubters were wrong. With 100 meters to go Yazzie exploded as the leaders tired. Yazzie passed the helpless Wells and Rivera with 50 meters to go to win convincingly in 1:57.91. Wells settled for yet another 2nd place medal in 1:58.55, with the defending champ Rivera 3rd in 1:58.89. Tuba City's Orman (2:02.49) took the 8th place medal, while teammate Lester (2:02.81) missed a medal by mere tenths of a second.

Warrior sophomore Billy Orman finished with a personal best time of 9:29.35 in the 3200m run (one of the fastest 3A times ever run), 15.5 points, a gold, a silver, and four medals overall. Yazzie finished with four personal best performances, 32.5 points, and four gold medals - a feat perhaps no other Arizona distance runner has ever accomplished. With one more year of high school competition ahead, Ryan Yazzie has already won five individual state championship titles, two relay state titles, and two cross country team state championship wins. Although he is a good friend and teammate, the sophomore Orman may be the only athlete capable of preventing him from winning more individual titles in the future.