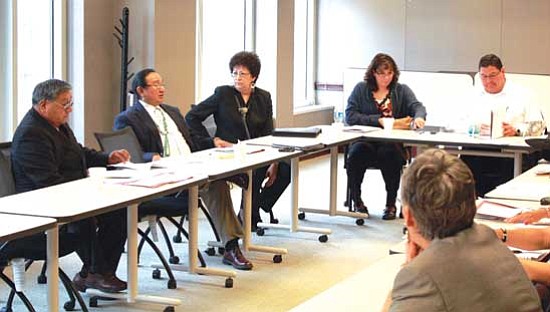 Navajo Council Delegate Rex Lee Jim represents the Navajo Nation in a meeting with the Council of Large Land Base Tribes May 11 in Washington, D.C.

The Council discussed issues related to rights-of-way, fees to trust land, water rights, the Tribal Transportation Allocation Methodology, housing development on fee and treaty lands, and issues related to the Eagle Sting Operation conducted recently by federal law enforcement officials - all issues effecting Indian Country in one way or another.

One important issue discussed at great length was a resolution, approved during a meeting on April 24 in Albuquerque, N.M., demanding the suspension of the Tribal Transportation Allocation Methodology (TTAM) as the formula for distributing funding from the Indian Reservation Roads Program.

According to the resolution, the Council of Large Land Base Tribes firmly believes the Indian Reservation Roads (IRR) Program was established by the United States Congress for the purpose of providing and maintaining roads, streets and bridges located on Indian Reservations and Indian Trust Lands.

The Council determined the root cause of this decline in funding is the misinterpretation and misapplication by the Bureau of Indian Affairs, the Federal Highway Administration and unresolved ambiguities contained within the regulation.

As a result of the misinterpretation and unresolved ambiguities, the Council believes scarce IRR funding intended for the benefit of Indians is being diverted to non-Indian entities to the extent that it is no longer an Indian Reservation Roads Program and has become a state and county roads program instead.

As a result of this issue, the Council demands the BIA and the Federal Highway Administration immediately suspend the distribution of IRR funding under the TTAM and revert to the Relative Need Funding Distribution method until such time the loopholes of 25 CFR 170 are eliminated or until a new funding distribution formula is established.

The Council also passed language indicating that upon suspension of the TTAM, the funding amounts should be frozen at the FY 2007 funding levels based on 2006 inventory data. The Council urges the U.S. Congress to take necessary action to restore the IRR program to its original intent and that this resolution is promulgated to members of the U.S. Congress.

According to the Council, a previous funding formula for distributing IRR funding was more fair and equitable to all tribes and prevented manipulation and misinterpretation in favoring one tribe over another.

As a solution, the Council believes a funding formula based only on tribal lands and Indian population would eliminate the manipulation of bogus road inventory data and would return the IRR program to what Congress originally intended.

Another resolution, approved on April 24, is in response to the Eagle Sting Operation conducted by the U.S. Fish and Wildlife and other federal law enforcement agencies were discussed.

The Council believes, like the majority of Indian tribes across the country, that the eagle has been an integral part and intrinsic to the traditions, culture and religion of many tribes pre-dating U.S. colonization.

This resolution is in response to U.S. Fish and Wildlife and other federal law enforcement agencies conducting raids, confiscating and interrogating many Indian reservations and powwow events in at least 14 states of the western United States under what purportedly was referred to as the "Eagle Sting Operation."

According to the resolution, the sting operations were done to address the illicit sale of eagles, its parts and poaching. The Council believes the operation caused a devastating impact that sent fear and trepidation into cultures and religious practices of tribes across the U.S.

In response, the Native American Rights Fund has agreed to serve as a clearinghouse for cases related to the Eagle Sting Operation being conducted by the U.S. Fish and Wildlife and other federal law enforcement agencies.

The Council plans to submit a draft resolution to the National Congress of American Indians regarding the acquisition, use and possession of eagles for traditional cultural and religious purposes. A meeting with the U.S. Fish and Wildlife and other federal law enforcement agencies is planned to discuss and seek solutions as the effects and impacts of the Eagle Sting Operation as well.

The Council supports efforts and encourages the U.S. Congress to conduct hearings immediately for the purpose of improving and enacting legislation for the traditional cultural and religious acquisition, possession and use of eagle feather and parts by federally-recognized tribes and their members.