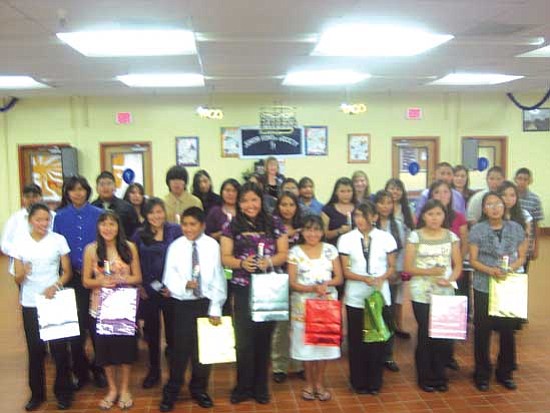 <i>Photo by Stan Bindell/NHO</i><br> The National Junior Honor Society shows off the eternal light that symbolizes the need for eternal education.

The 15 current officers welcomed the new members into NJHS by telling them about the characteristics that NJHS members care about.

Advisor Rita Keith said the tradition of the NJHS induction ceremony is symbolic and meaningful.

"It includes the lighting of candles as symbols of truth and knowledge. The motto of our organization is 'Light is the symbol of truth.' The lighting of candles also represents the society's torch, the symbol of the eternal light of knowledge. We hope that students' continued membership and participation in NJHS will instill in them a thirst for knowledge and commitment to truth," she said.

Keith added that NJHS had many successful projects this past year and they look forward to the coming year.

Hopi Junior High Principal Albert Sinquah praised NJHS for their achievements and their service to the community.