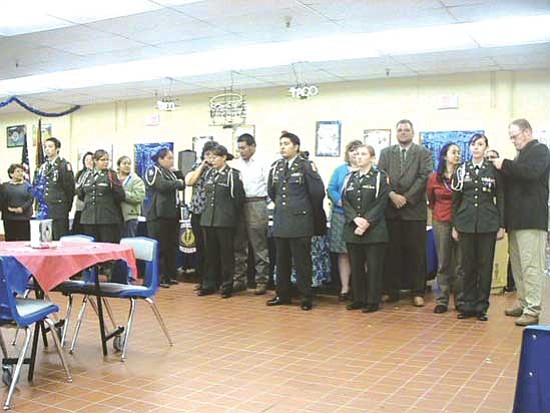 <i>Courtesy photo</i><br> Hopi JROTC cadets and new staff members stand proudly as they are promoted for the the 2009-2010 school year. Parents of the cadets pinned the cadets' new ranks onto them.

The evening started with cadets filling the Bruin Den with lots of laughter and joy. The cadets were in their Class "A" uniforms and looked as sharp as ever. They were anxious and excited to be celebrating their accomplishments and activities this way.

The receiving line began just after 6 p.m. and everybody greeted one another. When everybody was seated, the JROTC Honor Guard did the honor of posting the colors.

When they were finished, everybody was allowed to retrieve their meals. At 7:25, the 2009-2010 Battalion Commander, Command Sergeant Major and Executive Officer each spoke of their experience and future goals for the JROTC program. Then the new staff members were recognized and applauded for their excellent work that has taken place so far.

Honahnie is a member of the PHS Commissioned Corp. She is a registered nurse and has served nine years as the Associate Area Director of Health Programs and two years as the Chief Nurse Officer for the Phoenix area. She attended Bacone College in Muskogee, Okla. as well as Arizona State University and the University of Phoenix.

At 9 p.m., the Awards Ceremony finished and the Honor Guard retired the colors and was released to the dance. The dance was hosted by DJ Noyz of Phoenix. It lasted until 11:15 p.m.

The night was over by then, and it was definitely a night to remember for the cadets. They had fun and danced until it was over and time to go home.