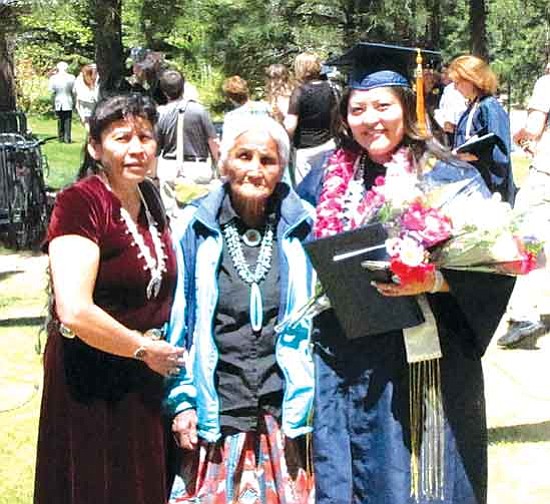 <i>Photo by Anton Wero/NHO</i><br> 2009 graduate Augustina Ann Clark of Flagstaff (right, bachelor of science, nursing) stands with her proud mom Genevieve Shorty and her grandmother Rose Shorty after the 2009 NAU commencement ceremonies on May 8 and 9.

FLAGSTAFF, Ariz. - Over the weekend, Northern Arizona University held its 2009 commencement ceremonies at the J. Lawrence Walkup Skydome. Approximately 3,000 degree candidates took part in the commencements. NAU recognized John W. Murphy for his commitment and contribution to education and the community by bestowing upon him an honorary doctoral degree. Also receiving an honorary doctoral degree were Steven R. Altman of Tucson, a 1983 graduate of NAU; J. Thomas Montfort of Flagstaff and Sara J. Baird, who was also selected as "Arizona's Teacher of the Year."

Opening remarks were provided the by the commencement's Master of Ceremonies Liz Grobsmith, Provost and Vice President for Academic Affairs. The College of Arts and Letters graduating students sang the National Anthem.

The Native American Student Services (NASS) of the Northern Arizona University hosted the 14th Annual Native American Convocation and Awards Ceremony prior to the commencement services. A handmade commemorative ivory sash was given to each degree candidate as a gift and for their hard work. The sash was decorated with blue and gold fringes with a logo drawn by Ronald Redsteer, The logo and design with the San Francisco Peaks, White Mountains, Monument Valley and the southern desert country, including the eagle and feathers, represents the student's courage, persistence and wisdom to succeed.

The Outstanding Graduate Student Award was given to Louise LaPahe, Hopi, who graduated with a masters in Elementary Education. Receiving the Louis H. and Betty W. Quayle scholarships, were Graylynn Hudson - Doctorate in Educational Psychology (Navajo) and Lupe Esparza - Master in Administration (Pascua Yaqui).

Congratulations go to all the award recipients and nominees and to the NAU graduating class of 2009.