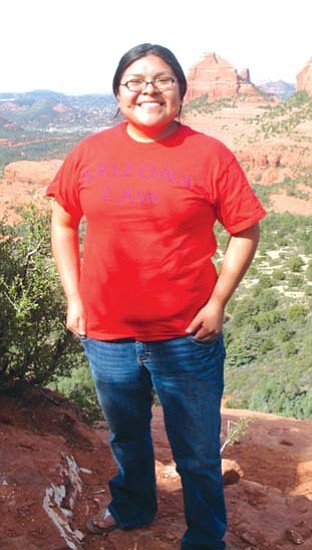 TUCSON, Ariz. - Founded in 1970, the primary mission of the National Native American Law Students Association (NNALSA) is to promote the study of federal Indian law, tribal law and traditional forms of governance and to support Native Americans in law school. Additional goals include reaching out to Native communities and encouraging Native people to pursue legal education as well as striving to educate legal communities about Native issues.

The UA chapter, consisting of 30 members representing tribal nations across the United States, includes Carlene Tenakhongva of First Mesa, daughter of Clark and Ann Tenahongva. She is a second year law student.

Tenakhongva stated, "It was wonderful to get the news that we won this national award, because each university chapter highlights the events and projects done as a group. It helps to exemplify what each chapter prioritizes."

"Personally, for me, it also shows how much each of our law students put in extra time and effort on behalf of their university community. It shows dedication and personal commitment," she added.

Two major events sponsored by the UA law student chapter this year were the Indigenous Peoples Day and co-hosting a golf tournament with the Latino Law Student Association to raise money for their organization.

"I have given my time to NNALSA and it's important, because as a law student, both time and money are very precious to us. Last summer I worked for DNA Peoples Legal Services and that experience really was so worthwhile. To help some person in some way legally is definitely so rewarding," she said.

"Growing up on the rez, you see such a sense of community and I carry that with me all the time. I feel fortunate to have had such a supportive family and a set of parents who just really love me and support me 110 percent. NNALSA is the same way. In the greater sense, we are like a little community within this bigger university community," stated Tenahongva. "If it wasn't for our fundraising efforts, we wouldn't have the money to attend these types of conferences which are so beneficial to our future careers."

Tenahongva concluded by saying, "Professionally, I want to work for my own tribe when I finish law school, but given the current political challenges that our tribe is facing right now, it's difficult to say how I will focus my future career. But I am grateful for this experience and hope that I can assist someone else in their legal career pursuits when I am finished with school."