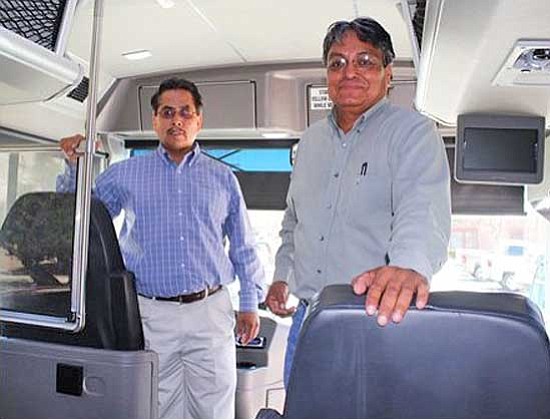 Speaker Morgan, along with staff from the Speaker's and President/Vice President's Offices had the opportunity to examine the recently purchased buses.

Lee Bigwater, department manager for Navajo Transit System, and Virgil Brown, division director for the Navajo Division of General Services provided tours of the buses before they became part of the main fleet of transportation that services 41 out of the 110 Navajo Chapter communities.

Bigwater made reference to the symbolism of the mustang graphics plastered across the buses.

"Traditionally, the Navajos traveled across the land with horses as their main means of transportation," he explained. "The people view the transit buses now as their horses."

He explained that the buses were purchased to replace older ones, which have been breaking down. Current buses have been running for six years or 500,000 miles as recommended by the Federal Transit Administration.

"I give a lot credit to Mr. Bigwater and his staff for their hard work in putting together this package," Virgil Brown said. "I also thank the Speaker's Office and the Council for allocating money to make the purchase of the buses a reality for us."

The bus purchases were made possible through a Nov. 4, 2008 MOU between Speaker Morgan and the Navajo Transit System. According to the MOU, $700,000 was given by the Office of the Speaker to purchase the buses in exchange for a reduced daily bus fare of $1 for passengers for two years on existing bus routes.

The agreement reads, "The Navajo Transit System will bear all operational costs during the two-year period and will not require additional funding from the Office of the Speaker."

Speaker Morgan said it was important to take action to help Navajo people afford transportation costs during a time when gas prices were soaring to nearly $5 per gallon, combined with tough economic challenges on the local, state and federal levels.

"The purchase of these buses is definitely needed for our Navajo people and it was designed to lessen financial burden, while providing them with reliable transportation to help them carry out their day-to-day activities," he said. "I worry about our Navajo elderly spending outrageous amounts of money for fuel to go to town for shopping or for hospital appointments. They may be spending anywhere from $75 to $100 on gas, just to drive into nearby border towns. I am pleased to know this agreement has generated positive feedback from the public and our office looks forward to working on more legislation that will help meet the needs of our Navajo people."

The $1 per day bus fare has become very popular and Navajo Transit System has seen an increase in passengers.

"Currently we are still only charging a dollar to ride the bus," Brown said. "We have since seen a huge increase in ridership since the dollar campaign began and the ridership numbers have doubled compared to last year's numbers. Previously, fares had been based on distance between routes and made the cost of round-trips on longer routes more expensive."

The Navajo Transit System, a department operating under the Division of General Services has been operating continuously since 1980 to provide transportation services to the general public within the 27,000-square-mile Navajo Nation and its border towns. Navajo Transit also operates charter bus service throughout the United States.

Funding for the Transit System comes from the state of Arizona and New Mexico, in addition to direct grants from the Federal Transit Administration's Tribal Transit Program.

Navajo Transit System has thirteen routes with new routes added this year, the new routes include: Route 9 from Dilkon, Ariz. to Ganado, Ariz.; Route 10 from Shiprock, N.M. to Fruitland, N.M.; Route 11 from Flagstaff, Ariz. to Tuba City, Ariz. and Route 13 from Window Rock, Ariz. to Crownpoint, N.M. and onto Gallup, N.M.

For information on current closures, schedules, changes and a printable route schedule, access the Navajo Transit System's website at www.navajotransit.com.