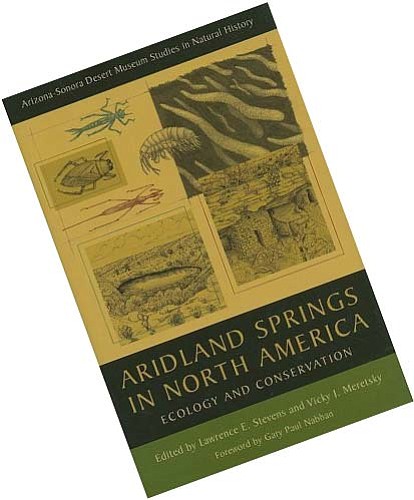 FLAGSTAFF, Ariz. - "Aridland Springs in North America: Ecology and Conservation," a new book on springs ecosystems, has been published by the University of Arizona Press. Edited by Lawrence E. Stevens and Vicky J. Meretsky, the book addresses the science and politics of springs-a timely subject as groundwater depletion across the continent and other human impacts rapidly decimate these vital sources of life and water.

The 27 dynamic, interdisciplinary contributors gathered at two symposia in Tucson, the first at the Arizona-Sonora Desert Museum in 2000 and the second at the Ecological Society of America meeting in 2002. This volume is a comprehensive assemblage of chapters on subjects presented at those gatherings, as well as others that arose from panel discussions.

Larry Stevens says, "Springs are the most biologically diverse, productive, and highly threatened ecosystems on Earth, and we hope this book is the first step in a national and global initiative to improve the stewardship of springs."

Dr. Stevens is curator of ecology and conservation at the Museum of Northern Arizona and the senior science advisor for the Grand Canyon Wildlands Council, Inc. in Flagstaff. Meretsky is an associate professor of conservation biology at the School of Public and Environmental Affairs at Indiana University in Bloomington.

In the book's foreword, one of the Southwest's best-known authors, Gary Paul Nabhan of the Southwest Center of the University of Arizona, states, "...a collection of writings about freshwater springs must be considered a sort of historical wonder: that we have paid immense attention to both river water and groundwater but not to one of the most vital linkages between the aquatic habitats, where underground aquifers literally bubble up to the surface, creating streams and wetlands."

Nabhan continues, "We are beginning to fathom the geological, biological, and cultural significance of springs, and this understanding will, we hope, be inspiring enough to motivate us to protect and restore these habitats before they blink out, one by one, like so many isolated candles on a geological layer cake."

"Here on the Colorado Plateau, there is a complex groundwater network of springs," says Museum of Northern Arizona Director Robert Breunig. "This volume not only emphasizes the importance of these ecologically and culturally significant habitats, but it presents a road map for future springs ecosystem study and management."

This book's contributors provide an in-depth overview of issues critical for improving the knowledge and conservation of springs, going beyond examining the ecological importance of springs to provide practical and productive ideas for their preservation. Aridland Springs in North America is available in Flagstaff at the Museum of Northern Arizona's Bookstore or by calling 928/774-5213, ext. 261.