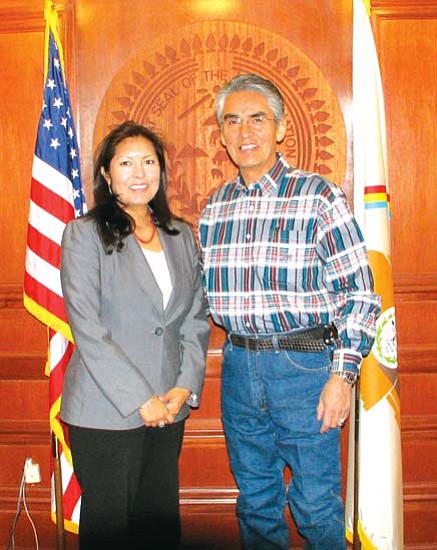 President Shirley said he appreciated all that Humetewa's office has done since she was appointed to her position in December 2007.

He told her the biggest law enforcement need on the Navajo Nation is jails.

"You don't want to have jails but it's a necessity to deter criminal activity," he said. "When you catch them, there's no place to put them and you have to release them, and they know that."

Humetewa said two places that have funding that could help the Navajo Nation are the U.S. Department of Justice and the Federal Bureau of Prisons.

She said she wants Navajo citizens to know that what occurs in federal courts has a direct impact on them. Sentencing for methamphetamine convictions is proving to be a deterrent to increased meth use and sales on the Navajo Nation, and that shows that people are being held accountable.

Humetewa said individuals who go to federal prison and are released have few options when returning to their home communities.

Often a condition of their release requires them to seek employment and treatment for alcohol or drugs. However, the remoteness of many Navajo Nation communities makes that difficult, if not impossible, because of the lack of jobs and the great distances to treatment facilities, she said.

That calls for the creation of remedial education programs and counseling for these individuals in order to help keep them from repeating behaviors that sent them to prison in the first place, she said. Unfortunately, many without options do return to prison within six-to-eight months.

She said the U.S. Department of Justice has programs that might assist these individuals that the Navajo Nation could seek.

She said her office and the U.S. Probation Office would support the Navajo Nation in partnerships with county governments in order to share law enforcement resources.

Humetewa said her office is eager to have the Navajo Nation use the U.S. Attorney's Office training curriculum for law enforcement officers which would then cover them as federal officers by making any assault on those officers a federal offense.

She also said her office, in conjunction with the Arizona Department of Gaming and the National Indian Gaming Association, could provide training for Navajo casino security staff to enable them to preserve evidence in investigations.

During her first year on the job, Humetewa's office has:

• Received 487 cases in Indian Country, an increase of 160 cases from the year before, against multiple defendants while handling ongoing cases from previous years and participating in ongoing investigations.

• Participated in a record number of tribal prosecution and law enforcement organizational meetings, consultation and training events to share information, build coordination, and improve the quality of service to Arizona's Indian Country.

• Provided training to more than 100 tribal police officers to enable them to receive their Special Law Enforcement Commission Cards, which allows them to investigate federal crimes in Indian Country.

The mission of the United States Attorney's Office for the District of Arizona is to:

• Represent the U.S. effectively in criminal and civil cases.

• Advocate for the rights of victims and support witnesses throughout the criminal justice process.

• Enhance and strengthen the communities we serve.