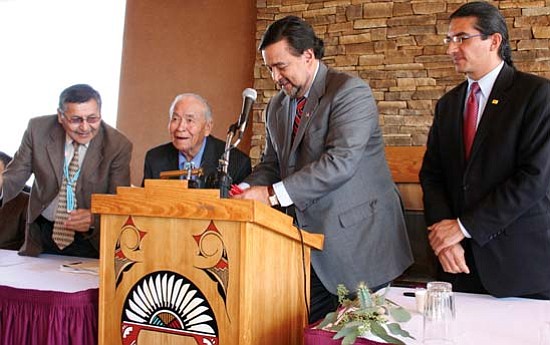 ALBUQUERQUE, N.M. - Governor Bill Richardson on March 19 signed the long-awaited State-Tribal Collaboration Act at the Indian Pueblo Cultural Center. The governor was joined by Indian Affairs Secretary Alvin Warren and tribal leaders from around the state.

"The State-Tribal Collaboration Act will promote and strengthen the relationship between the state and the 22 sovereign tribes and pueblos here in New Mexico," Gov. Richardson said. "I am pleased to sign this landmark bill, which further expands my commitment to our Native American communities, provides greater consistency across all cabinet-level agencies in working with tribes, and ensures that productive state-tribal relations remain a priority into the future."

Senate Bill 196, sponsored by Sen. John Pinto, enhances government-to-government communication and collaboration between the state and tribal governments. The Act requires cabinet-level agencies to develop policies that promote communication and cooperation between the state and tribal governments and ensures that each of the 34 Executive agencies permanently designates a tribal liaison. It also provides for an annual state-tribal summit, training to state agency managers and employees who have ongoing communication with the tribes and an annual report that accounts for each Executive agency's activities pursuant to the Act.

"The State-Tribal Collaboration Act was a top priority this legislative session and serves as another significant milestone in the journey of tribal and state leaders to forge partnerships to address issues important to all New Mexicans, including education, health, environmental protection, infrastructure and economic development," said Secretary Warren. "The Act will serve as a national model for institutionalizing mutually beneficial policies and protocols between state and tribal governments."

Endorsed by the Interim Indian Affairs Committee, SB 196 received strong support from the leadership of New Mexico's tribes, nations and pueblos. The measure passed all committees and both the House of Representatives and the Senate unanimously.

"I am truly moved by the passage of this bill, which is a culmination of work that has been done by many people over many years," said Senator John Pinto. "SB 196 will result in better coordination of resources to address shared priorities as well as higher quality services to our more than 200,000 Native American citizens in New Mexico."

Santa Clara Pueblo Gov. Walter Dasheno stated, "I am impressed by the requirements encompassed in this bill that will build upon the government-to-government relationships that will benefit our future generations. I look forward to the annual summit between the Governor and tribal leadership, which will ensure that the state will know the needs of our Indian people."

"The signing of this bill marks a new age and a new era in state-tribal relations and New Mexico is now on the map as a guiding light for the rest of the country," said All Indian Pueblo Council Chairman Joe Garcia. "However, this has not been an overnight accomplishment. Gov. Richardson, our tribes, our legislators, the Indian Affairs Department, and many others have worked very hard to turn this vision into a reality for the future well-being of our children and our grand-children."