Alcohol and elder abuse do not mix 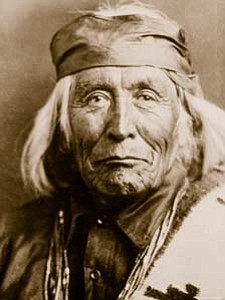 I read in the news just a few weeks ago - on my mother's 70th birthday, coincidentally - about a 50-something year old Navajo man who beat up his 90-year old elderly father in a drunken fit of anger, threw him out of their vehicle and basically left him to fend for himself alongside a fairly busy stretch of Interstate 17 near Munds Park.

My reaction to this was nothing short of sheer disbelief - that someone would actually commit such a despicable act against an elder, let alone their own parent! What compounds the situation even more was that this elder couldn't even get around without the assistance of a walker and is reportedly a decorated military veteran on top of that.

The fact that alcohol was involved is disappointing enough. Unfortunately, however, alcoholism is an all-too-common way of life for a lot of people on the rez. Being from around the Gallup, New Mexico area - which at one time was iniquitously labeled "Drunk City" - I have seen elders abused in many different ways, whether overtly or subtly. The abuse isn't always physical, but it is abuse nonetheless.

Elder abuse is typically defined as any action (or lack of action) by a person in a relationship of trust (usually a family member), which results in physical and/or psychological harm to an older individual. While the elder in the aforementioned situation wasn't badly harmed or injured physically (thankfully), the fact that he was left alongside a busy highway by his own son will most likely leave irreparable emotional/psychological scars.

Throughout my entire childhood, I was always taught to respect my elders because elders were the wisdom and tradition bearers of our people. No matter what tribe you're from, our elders deserve respect because they possess the collective knowledge about all of our traditional ways, our languages, our cultural and religious observances, our heritage and most importantly, our collective histories. I firmly believe that without knowledge of and respect for our past, we cannot possibly pave the way towards our future.

Nowhere is this more evident than in Native American culture. For one thing, it's rare to see Native American elderly in a managed care facility or "old folks home." Why? Because that's just not the Native American way! Often times, our elders remain at home with the family where they are most comfortable, and where they are free to pass their knowledge on to the next generation. In my case, I was fortunate enough to spend much of my childhood with my grandparents because that's where I was able to learn how to speak my Native Zuni language.

As precursors to the next generation of Native Americans, it is up to us to properly acknowledge those who came before us, as they paid homage to those who came before them. If we don't, then how can we expect our grandchildren, great-grandchildren and their children to respect who we are today? If we, as the children of today, get ourselves caught up in the mix of alcoholism and elder abuse, then all we are doing is opening the door to where we will eventually be the ones getting abused by our children and grandchildren. And we may be the next one to be left out on a busy stretch of highway to fend for ourselves ... or worse!

Long story short, elder abuse is not a part of our traditional ways. So let's learn to better respect our elders for who they are today because no matter what background or situation you come from, abuse hurts at any age.

Alcohol and elder abuse do not mix
Is this how we honor our fathers?
A heartfelt "thank you" to the staff of the Winslow Health Care Center
Editorial: It's all about respect
'Equal Voice for America's Families' comes to Flagstaff
Event Calendar