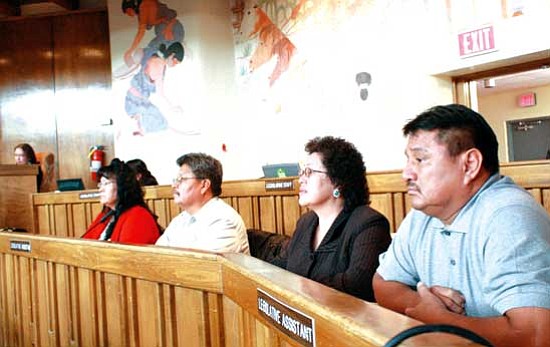 <i>Photo by Joshua Lavar Butler</i><br> Members of the To’Nanees’Dizi Local Government present information about their tax code to the 21st Navajo Nation Council during the 2009 winter session held Jan. 28. The measure, proposing tax increases for the To’Nanees’Dizi Local Government, was tabled at that time for further discussion. Pictured from left to right are Priscilla Littlefoot, Max D. Goldtooth, Helen Herbert and Robert Yazzie.

Legislation No. 0740-08 was tabled during the winter session and a work session was suggested to educate members of the Council and to also get additional input from the surrounding communities.

The work session began with an introduction by Max D. Goldtooth, president of the Council of Naa'taani from To'Nanees'Dizi Local Government, formerly known as Tuba City Chapter. Sponsors Raymond Maxx and Bobby Robbins explained its purpose to the Council. Priscilla Littlefoot, To'Nanees'Dizi Local Government executive manager followed up with a presentation explaining its impacts and the Council floor opened up for questions and answers.

Some council delegates expressed that more hearings should be held. Three additional public hearings were held in regards to the legislation, one at Coalmine Canyon and another at the Tuba City Chapter.

The hearings were attended by several council delegates, chapter officials and members from neighboring chapters. Presentations were also made to the Judiciary Committee and the Transportation and Community Development Committee.

Littlefoot said, "Give us the opportunity on this proposed tax code, we have a growing community with growing needs."

A few council members questioned if non-certified chapters will continue receiving tax dollars and there were concerns of double taxation.

Littlefoot explained non-certified chapters would continue receiving their portion of taxes. Non-Navajo businesses in Tuba City will pay three different types of taxes, but according to N.N.C. 24 §610, the businesses receive a credit and they don't have to pay all three taxes, this helps to offset their tax payments.

"We service the surrounding areas and we overlap in many areas, but we work together," she explained. "Most of the businesses are in town and anyone who falls within the administrative area will be taxed. Our community has been 100 percent impacted by the Bennett Freeze - nine chapters total and we are recovering from that."

Littlefoot also explained the tax would have a positive impact on neighboring chapters, because the sales tax will be six percent. Non-certified chapters are going to gain through the services that are provided.

"We are initiating this tax to further our people and to enhance our services for people that live in Tuba City and the surrounding chapters," Littlefoot added. "We want to get facilities up, like senior centers where elderly go to eat, to improve bus routes and to purchase a road grader. Without these taxes, it will not be possible."

Maxx explained, "Our community has initiated this tax code based on data; there are a lot of people within the Tuba City area that vote, our own district. The taxes are a lot, but it is not enough to take care of the basic needs of the people in our area."

Several council members voiced their support for the tax code.

"We are setting precedence in doing this tax code and we are providing a path for other chapters to follow," Robbins said. "It is a positive legislation and if it passes, other chapters will go along with it. We already have a four percent Navajo Nation sales tax and we are only proposing to increase it by two percent. Border towns have higher tax rates and our community is supporting this."

Delegate Evelyn Acothley (Bodaway, Cameron and Coppermine), supports the legislation and says it is a step in the right direction.

"This is the purpose of LGA control: to initiate their own governments to seek funding and to upgrade their community to help themselves," she said. "What other funding source do we have? Even with the Navajo Nation, we don't have the revenue. There's too much demand and this tax ... is an excellent way to do business to generate money for communities."

"The Shonto Chapter is right in the middle of two tax-based communities, Kayenta to the east and Tuba City to the west. Many of our community members go to those to towns to shop," he said. "I think the ability to tax your own community is a step in the right direction for tribal communities throughout the U.S. That is what LGA was put in place for - community and economic empowerment."

The To'Nanees'Dizi Chapter thanked the Council for considering their legislation.

The tax is for the Tuba City area only and not the entire Navajo Nation. If implemented, the tax code will be effective beginning Jan. 1, 2010.