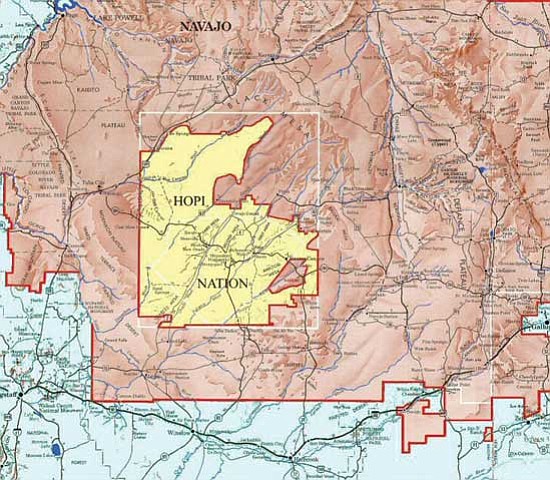 The map above shows Navajo Nation lands encompassing the Hopi Reservation (inset yellow). The Bennett Freeze, enacted in 1934, caused much animosity among the Navajo and Hopi Tribes who fought for over 40 years to establish land rights in what was known as the Bennett Freeze area. A mutual agreement between the two tribes in 2005 ended the stalemate. However, the Bennett Freeze is still part of federal law, which the Senate is now seeking to repeal.

The original language of PL 93-531 authorized a construction freeze in the western portion of the Navajo Nation. Although the Bennett Freeze was lifted in 2005 pursuant to an agreement between the Navajo Nation and the Hopi Tribe, the authorization for the freeze remained.

The legislation, introduced by Senators John McCain (R-Ariz.) and co-sponsor Jon Kyl (R-Ariz.) seeks to end more than 40 years of restrictions for residents in the western Navajo Nation region in making improvements and repairs to homes and property.

The "freeze" was initially placed in 1966 as a temporary effort to prevent one tribe from taking advantage of another while the Navajo-Hopi land dispute was being settled.

"For more than 40 years, Navajo families residing in the Bennett Freeze area lived under an oppressive and unjust law that has essentially made poverty mandatory," stated Roman Bitsuie, executive director of the Navajo-Hopi Land Commission Office.

The origins of the Bennett Freeze go back to 1934 when the federal government sought to clarify the western boundary of the Navajo Nation to provide an area for the Navajo and "such other Indians as may already be located thereon." This language created ambiguity over ownership of the land and the Hopi Tribe sought rights over the area. In 1966, Commissioner of Indian Affairs Robert Bennett ordered a "freeze" on development within a 1.5 million acre area.

Bitsuie noted, "We are appreciative of Senator McCain's sponsorship of S. 39. Senator McCain has expressed strong support for righting the wrongs suffered by families in the former Bennett Freeze area. Senator Kyl joined ... as a co-sponsor for which we are also grateful. The work of the Senate Committee on Indian Affairs [advanced] this legislation quickly through the Senate ... We look forward to working with the House to achieve quick passage there and clear the bill for presentation to President Obama."

In May 2008, the Senate Committee on Indian Affairs held a hearing on S. 531, identical legislation to S. 39 that was introduced in the last Congress. At that hearing, the Navajo Nation, the Hopi Tribe and the Department of the Interior testified in support of its passage.

Raymond Maxx, then-Chairman of the Navajo Hopi Land Commission testified, "For the families who live in the former Bennett Freeze area, so long as the authority for the Freeze remains in the U.S. Code, there also remains a fear that it could be reimposed. Passage of S. 531 would send a powerful signal that all parties have begun the process of moving on from the divisive disputes of the past. It would also ensure that there are no ambiguous interpretations which could lead to the re-imposition of the development freeze."

"This hearing was historic," noted current Commission Chairman Leslie Deal, "because for the first time, all the interested parties came before the Congress in agreement and the result has been passage of an important piece of legislation."

Roman Bitsuie added, "The government has a moral obligation to support the redevelopment of the former Bennett Freeze area. The legal issues between the two tribes are largely resolved. Now it is time for all parties to work together to address the human issues that this legacy of tangled and unjust laws has left behind."