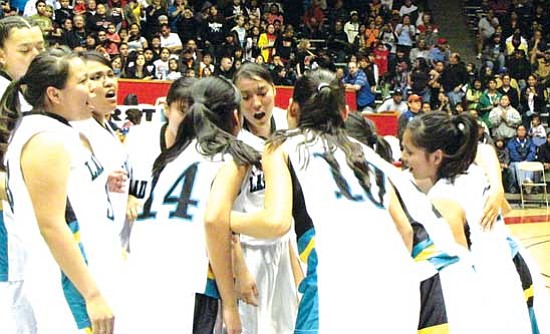 ALBUQUERQUE, NM - "I remember coming and watching. I remember when the buzzer went off - everybody just running on the court just screaming, yelling and mauling the coach and taking pictures. I just thought they must be really happy [and] always wondered how that felt - being the best in your class," said Nicole Crisp when asked if she remembers her older sister, now head coach Rainy Crisp, winning the New Mexico 2A state title.

It's a rarity to win a state basketball title as both a coach and a player - only a handful have done it. When asked to compare if winning the state title as a coach or as a player felt better, Coach Crisp answered, "They both feel good. As a player, just going out there working hard and getting that blue trophy, that was an awesome feeling. Being a coach, seeing your girls go in and ... making history and knowing that I was a part of that, there is no comparison. It's great winning as a player and great feeling winning as a coach."

Nicole Crisp scored 10 points in the opening quarter to give the Lady Eagles a 23 to 11 lead over the Lady Mavericks, including five straight points from the opening tip as Navajo Prep jumped started to early 7 - 0 lead. Crisp broke away for an uncontested layup off the glass to open the second frame, continuing to push the ball as the Lady Eagles led at the break, 34 to 23.

Navajo Prep and Lordsburg traded baskets in the third frame. The Eagles steadily outscored the Mavericks by a point to take a 50 to 38 advantage as the quarter concluded. Navajo Prep then went on 12 - 0 run in the final quarter and coasted to 18 point win, 72 -54.

Navajo Prep opened its run to the 2009 Class 2A State Basketball Championship by defeating the Rehoboth Lynx in the first round 48 - 38 and advancing to the quarterfinals where they defeated the Tularosa Wildcats, 54 27. In the semifinal game, Navajo Prep were 67 to 60 winners over the Navajo Pine Lady Warriors. Navajo Pine was a first round winner over Santa Rosa.

In the semifinal game, the Lady Spartans of St Pius (27 - 1) were led by three players in double figures: Alexandria Membreno, Agnes Gallegos and Elisha Levingston, who combined for 42 points to defeat the Kirtland Central Lady Broncos (24 - 6). Jessica Benally, the McDonalds All American team nominee led Kirtland Central with 13 points, followed by La Teesha Nez with 10 points.

The Lady Broncos advanced to the Girls Class 4A semifinal game as first round winners over the Los Alamos Hilltoppers 62 - 33. They also had a quarterfinal 58 to 27 win over the Aztec Lady Tigers of Aztec, New Mexico.

Shiprock posted a 62 to 40 win over the Albuquerque Academy Lady Chargers in the first round to move to the quarterfinal matchup with Moriarty.