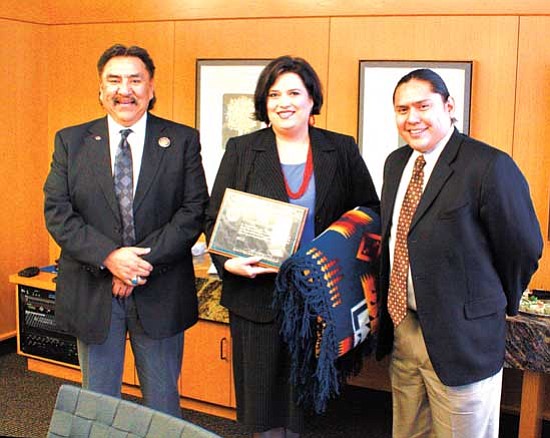 PHOENIX, Ariz. - The Honorable Speaker Lawrence T. Morgan thanked attorney Katosha Nakai, lobbyist for the Navajo Nation, during a special recognition gathering held in her honor at the Lewis and Roca LLC law firm on March 4.

Nakai, Choctaw from Oklahoma, has been working with the Navajo Nation since 2005 as the lobbyist and liaison between the Navajo Nation and the state of Arizona, including the governor's office. One hallmark project she was instrumental with was the $2 million appropriation for Dilkon District Court. The $2 million was split into two appropriations - $1 million in 2006 and another in 2007.

It was nearly a year ago that the Judiciary Committee held a groundbreaking ceremony for the new multi-purpose building. The building was made possible through a collaborative effort between the state of Arizona, the Judiciary Committee, the legislative, judicial and executive branches of the Navajo Nation - a project that received matching funding from the tribe. Construction is currently in progress for the facility and will be ready by this summer.

The 14,000 square-foot facility, designed to reflect Navajo customs, is being constructed on 2.3 acres on the corner of mile post 55 on Navajo Route 15 in Dilkon.

Nakai was very influential in securing funds for the facility with Arizona Sen. Albert Hale (D-Window Rock) and former State Rep. Albert Tom (D-Chambers) spearheading the funding request from the state of Arizona.

Speaker Morgan said, "Mrs. Nakai has been extremely influential in securing vitally needed funding for the Navajo Nation - we are thankful for her services. The Navajo Nation will look forward to continuing its working relationship with Nakai and Governor Brewer's administration."

"I express my sincere appreciation for Mrs. Nakai's tireless work on behalf of the Navajo Nation, especially our Legislative Branch," Begay said. "Nakai advocated for the Nation on all issues with the Arizona State Legislature and with the governor's office. She served Navajo unquestionably above what was requested of her - she helped to make our Dilkon District Court a reality."

Nakai is a graduate of Arizona State University College of Law and currently resides in Phoenix with her husband Errol Nakai (Navajo) and their two daughters.