Chinle Wildcats claw their way into AZ 3A championships 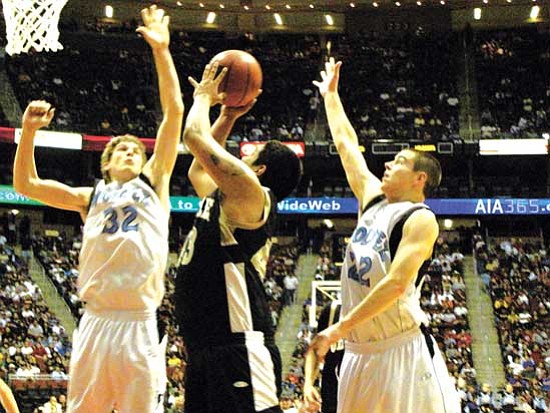 <i>Photo by Anton Wero/NHO</i><br> Chinle’s Denzel Harvey (43, center) works for a basket in the paint while Estrella Foothills’ Sean Duncan gets ready to block the shot. Estrella Foothills won the 2009 Arizona 3A Boys State Basketball championship game, with a final score of 46 to 40.

GLENDALE, Ariz. - More than 16,000 fans were on hand to witness school history at the Jobing.com Arena in Glendale as the Chinle Wildcats (25-6) and Estrella Foothills Wolves (29-2) met for the 2009 Arizona 3A Boys State Championship game. It was a first for the Class 3A North Region Champion Chinle Wildcats.

The Wildcat's trio of Denzel Harvey, Mathias Claw and Koyai Clauschee combined for nine points countered by Corey Hawkins, Sean Duncan and James Pierce for the Wolves' 12 points and a first quarter lead. The score was tied four times in opening quarter, which included a trey by Claw for the Wildcats' last lead of the game.

Duncan, son of former NBA star Hersey Hawkins, dominated the second quarter scoring the final eight points of the quarter for the Wolves, including a three-pointer and a slam dunk with 2:30 left to take a 26-15 advantage.

Determined not to be outdone, the Wildcat's Harvey, who was held to only two points in the first half, scored nine points during Chinle's 15 to 10 third quarter run. Aided by Claw's money ball that caused the partisan crowd to erupt into a frenzy, the Wildcats cut the lead to 36-30, Hawkins continued to lead the Wolves' attack with eight points.

The teams then scored 10 points apiece; the Wolves' Hawkins kept pace with the Wildcat's Claw, Clauschee, Harvey and Laine Yazzie for the 46 to 40 finale.

The Wolves were led by Corey Hawkins' game high 27 points and Sean Duncan added 10 points for the 2009 Arizona 3A Boys State Champions.

In a valiant effort, Mathias Claw and Denzel Harvey led the Chinle Wildcats with 13 and 12 points respectively.