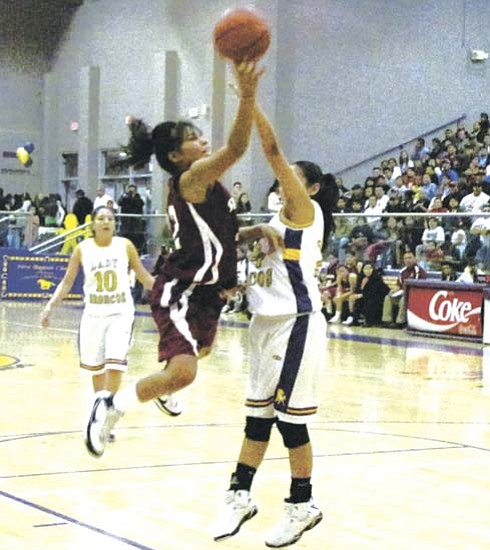 <i>Photo by Anton Wero/NHO</i><br> Tenisha Royston (32) of the Shiprock Lady Chieftains shoots over the outstretched arms of Kirtland’s Nikki Ford (24), during the New Mexico 1–4A District championship game. The Kirtland Central Lady Broncos won the game 51 to 50.

KIRTLAND, N.M. - It is not unusual for the Kirtland Bronco Arena to be packed with fans, but this time, fans arrived at sunrise and waited for hours to witness the District 1-4A matchup between the Kirtland Central Lady Broncos and the Shiprock Lady Chieftains.

The winner would have a guaranteed trip to the 2009 New Mexico State tournament. In the end, the Lady Broncos kept alive an eight game winning streak by successfully holding off a fourth quarter surge by the Lady Chieftains for a 51 to 50 victory.

The win assured the Kirtland Central Lady Broncos (22-5) a trip to the 2009 New Mexico State tournament where they will host the Los Alamos Lady Hilltoppers on Friday, March 6 in the first round.

The Lady Chieftains (20-6) will play the Albuquerque Academy Lady Chargers in Shiprock, N.M. on March 6 as well. The tournament will continue with the winners advancing to the New Mexico State Championships finals to be held March 13 at "The Pit" on the University of New Mexico campus in Albuquerque.

Both teams each scored six points in the third frame and the Lady Broncos clung to a 13 point lead. The Lady Chieftains outscored the Lady Broncos with 18 points while holding them to six markers for the second consecutive quarter and the near comeback win. However, the Lady Broncos kept Shiprock at bay and narrowly escaped with a one point win, 51-50.

The Shiprock Lady Chieftains were led in scoring by Charmayne Bellamy with a game high 19 points and Tenisha Royston contributed 15 points.

FARMINGTON, N.M. - In boys District 1-4A championship action, the coveted title and trip to the 2009 New Mexico State tournament belonged to the Farmington Scorpions, who won decisively over the Shiprock Chieftains with a final score of 44 to 29.

The Scorpions (13-13) will host the Los Alamos Hilltoppers on March 7 in the first round. The tournament will continue and winners will advance to the New Mexico State Championships finals on March 14 at "The Pit" in Albuquerque.

The runner up Shiprock Chieftains (15-11) did not advance to the postseason playoffs.

The Chieftains led 8 to 7 at the end of the first quarter, but were outscored 12 to 2 in the second frame to trail by nine points at intermission, 19-10.

Farmington scored 12 points while Shiprock could muster only six markers in the third quarter. The Scorpions took a 31-16 lead at the end of the quarter and continued into the final quarter where both teams scored 13 points each.

Farmington eventually coasted to win 44 to 29.