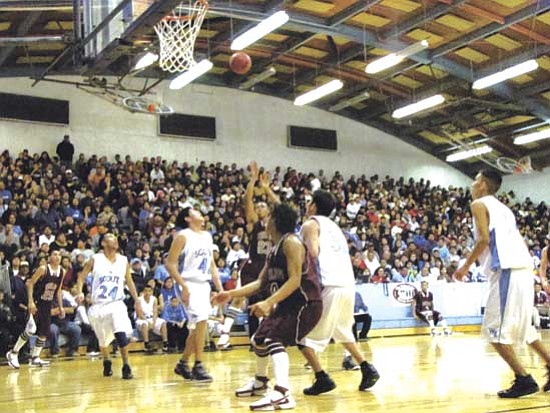 <i>Photo by Anton Wero/NHO</i><br> The Winslow Bulldogs’ Jevon Estelle (23) shoots a jumper for two points at the “Thunderdome” in Window Rock. The Bulldogs defeated the Scouts 55 to 54.

WINSLOW, Ariz. - The Winslow Lady Bulldogs overcame a nine point third quarter Window Rock Lady Scout lead and defeated the Window Rock girls 46-41 in a 3A Conference quarterfinal game played on Saturday. It was Winslow's fourth victory over the Lady Scouts this season and left the Lady Bulldogs with a 28-1 record heading for the semi-finals at Glendale on Friday. Window Rock ended its season with a record of 16-10.

Window Rock led most of a close first half, holding a 13-11 advantage after the first quarter and a single point 22-21 lead at the intermission. The Lady Scouts had a nine point advantage midway through the third period, but led only 35-34 entering the final quarter.

Winslow did not take a second half lead until only 3:30 was left in the game. Samantha Sam stole the ball from a Lady Scout under the basket and scored to give the Lady Bulldogs a 38-37 lead. Free throws in the final period made all of the difference for Winslow as they hit 11 of 16 charities in that quarter to finish 13 for 18 in the game. Window Rock made only four of 12 charities. A key play in the final seconds was a Winslow steal and an intentional foul on the Lady Scouts that sent Winslow to the line and gave them the ball back out of bounds.

Chrissandria Jackson led the Lady Bulldogs in scoring with 12 points. Samantha Sam was also in double figures with 10 points. Coralie Clark led all scorers with 13 points for Window Rock.

In other games, Payson defeated Monument Valley 53-48; Chinle defeated Maricopa 64-30 and Alchesay defeated Safford 86-53. Winslow will play Alchesay at 6 p.m. on Friday in Glendale. The winner will meet the Chinle-Payson winner on Saturday.

WINDOW ROCK, Ariz. - The Winslow Bulldogs edged the Window Rock Scouts 55-54 in the quarterfinals of the Arizona State 3A Conference Tournament at Window Rock on Friday. The Bulldogs improved to 21-10 for the season and ended Window Rock's season with a 21-8 record. Winslow will meet another 3A North Region team in the semi-finals at Glendale as the Chinle Wildcats defeated the Payson Longhorns 67-57 in another quarterfinal game at Chinle. That game is slated for 4:15 p.m. on Friday, March 6.

The Bulldogs started with a good first quarter and most of a good second period. Winslow led 14-7 after the first period and had a 15-point advantage near the middle of the second quarter but saw the margin cut to single digits at 28-20 by the intermission. Window Rock roared back to tie the game at 31-31 by the middle of the third quarter. The teams entered the fourth and final quarter still tied at 37-37. Window Rock took its first lead of the night at 42-41 with about six minutes left in the game. Winslow tied the game at 45-45 a minute later. The teams traded baskets most of the remaining time. The contest was not decided until the Scouts missed a shot at the final buzzer.

Dale Dixon took game scoring honors with 18 points for Winslow. Stacey Berg with 15 points and Kraig Shirley with 14 were also in double figures for the Bulldogs.

Chris Tallwood led Window Rock with 17 points.  He left the game with an injury within the last two minutes which may have hurt the Scouts' chances. Josh Mitchell with 14 points and Daniel Begay with 12 were also in double figures for Window Rock.