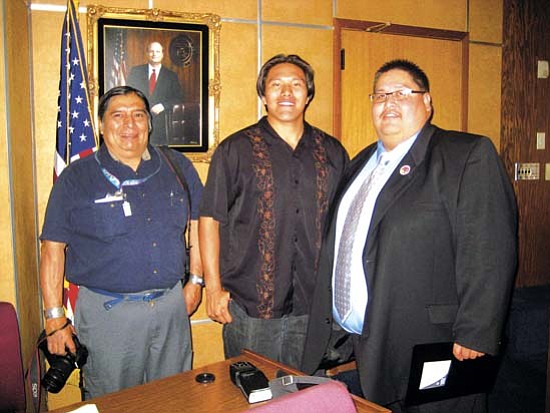 Students from Hopi Jr/Sr High School were among those packed into the gallery watching the proceedings.

Thomas Beauty, chairman of the Yavapai Apache Tribe said tribal and state leaders need to work together for a better Arizona. He noted that while his tribe has a little more than 2,000 members that it is one of the largest employers in the Verde Valley with more than 1,000 employees.

Chairman Beauty told the gallery that everything they have is because of somebody who came before them.

"Today we seek common ground. We are all Arizonans," he said.

Chairman Beauty urged the tribal legislators to make their decisions based on what is best for the community - not on party lines. He said that the Yavapai Apache Tribal Council makes decisions based on tribal members' needs. He urged the state legislature to do the same.

"We all want a better quality of life with good paying jobs. I hope the state legislature takes appropriate steps to get the economy back on track," he said.

Chairman Beauty told the state legislature that what they cut due to the state's deficit is important. He told them to make the decision in the spirit of bipartisanship using creativity and knowing that the stimulus funds will help.

He also urged the legislators to move forward with projects that help the entire community so that Arizona can reclaim its great glory.

Chairman Beauty said he is committed to reaching out to other tribes. He also spoke about the need for funding tourism.

"Tourists don't bring water, but they bring their wallets and golf clubs," he said to hearty laughter from the audience.

But, on a more serious note, he spoke of the importance of water.

"The elders say: 'As long as the river runs life will be good.' That comment is as simple as it is profound," he said.

In that spirit, Chairman Beauty spoke of the need for protecting Fossil Creek, a pristine area that is sacred to his tribe. He quoted Yavapai Apache elder Vincent Randall who stated that without water there cannot be a healthy economy.

"If we don't take care then somebody will pay the price for our lack of vision. We are the stewards of this resource," he said.

Chairman Beauty said Arizona is a stronger state and instills longevity when it protects its natural resources. He noted that Arizona is "going through a rough patch now and the question is how it gets out of this mess."

"We need to roll up our sleeves and work together," he said.

Before giving his speech, Chairman Beauty warned that it took him six years to get through high school because he had to give a speech in economics class and he couldn't get himself to do it.

Diane Enos, president of the Salt River Indian Community, told the crowd that each tribe's history is unique but that tribal nations have been working cooperatively before Arizona became a state.

President Enos said working cooperatively is an activity that is honored and sacred. She said the tribes have many inter-governmental agreements and compacts with the state.

President Enos noted that tribal officers take the same constitutional oath as President Barack Obama took. She said honor is important and "we cannot have flags and the constitution without honor."

Shan Lewis, vice chairman of the Ft. Mohave Tribe, pointed out that Native Americans are on 28 percent of the land in Arizona. He said it is important for the tribes to work together with the state and counties.

Vice Chairman Lewis said his tribe and Mohave County have worked together on disease control. He said during these tough economic times that it is even more important to work together, urging legislators to consider all options before implementing any more cutbacks.

He praised Arizona State Sen. Albert Hale for introducing a bill that calls for a tribal representative to be on the state transportation board. He also called on the state legislature to make water use and water management a focus of this year's legislative session.

Vice Chairman Lewis pleaded with the state legislature to not cut back any transportation funds because highways that cross Arizona reservations have been inadequate for the past eight years. He told the state legislators that it is important to have coordination and consultation with the tribes regardless of the issue.

Arizona State Treasurer Dean Martin, who held an open house for the tribes before the speeches, said his office can help the tribe with investment pools and with creating endowments for scholarships and in other areas.