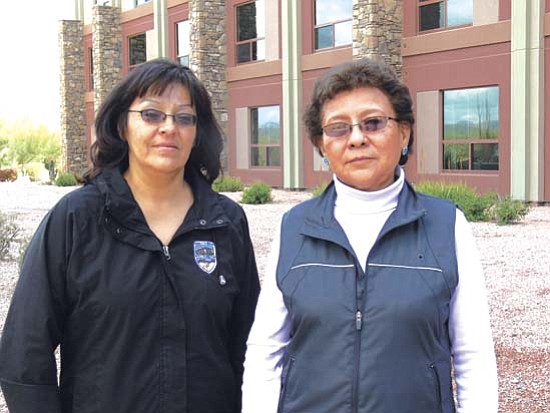 <i>Photo by Rick Abasta</i><br> Brenda Catron (left) and Effie Yazzie are happy to report for the first time that Antelope Canyon Navajo Tribal Park has generated over $1 million in revenue for the 2008 calendar year. The Navajo Parks and Recreation Department is excited with this accomplishment.

WINDOW ROCK, Ariz. - For Effie Yazzie, 2008 was the most successful year as park manager for Antelope Canyon Navajo Tribal Park.

The 2008 calendar year was the first time Yazzie's staff raked in $1 million in revenue for the park, located on the western edge of the reservation in the community of Lechee.

Upper and lower Antelope Canyon has become one of the most photographed areas in the world, due to the majestic beauty of its slot canyons. The canyons slice through Navajo sandstone for remarkable views drawing visitors from across the globe.

Ray Russell, department manager for Navajo Parks and Recreation, said the achievement was the result of hard work and thorough accountability.

"Antelope Canyon is a model park for the department," Russell said. "I think Mrs. Yazzie and her staff have built up their revenue through the years from accuracy and consistency. All of the credit goes to them.

"In three to four years, our park system will all be at another level, with customer satisfaction and improved facilities," he added.

In 1997, Yazzie was hired to manage the park and helped establish a system for fee collections. It's been a long journey, one full of learning, in the 11 years it took to clear the $1 million mark, she said.

The staff under her direction has been instrumental in creating success.

"I think accountability and having trustworthy people are two keys that really helped us succeed," Yazzie said.

In order to grow positive morale for her park, Yazzie offered yearly incentives in the form of field trips to other park operations.

Her staff not only visited the parks, but observed and interacted with employees there, inquiring about strategies for successful park operations.

Afterward, her staff would write a report on their experiences and share it with the department.

"We write a report of our accomplishments to Mr. Russell each year and explain what we learned," Yazzie said. "Sometimes, just getting away from the park and going to a different environment provided that learning opportunity."

Once the park tour season rolls around, Yazzie said two to three other fee collectors are hired to help with operation of the park.

Those numbers don't reflect the large volume of school groups and other nonprofit entities that are eligible for fee waivers. Educational groups that visit the park travel from across the country, not just the local area, she noted.

The bulk of the tours are handled by any of the five tour operators working in the canyon. Yazzie has a close working relationship with these operators, who are often times her eyes and ears inside the park.

"If there's anything unusual they notice, the tour operators will come back and report it," she said.

Currently, there are five tour operations inside Antelope Canyon, taking visitors throughout the park and sharing its illustrious history and magnificent beauty.

Recently, one tour operator retired after putting over 20 years of service at the park.

In the interests of the tourists, Yazzie is forging ahead with new projects for the park. The projects will be implemented in phases, she said.

Phase A is the interpretive program project, which is the creation of an information kiosk.

She is coordinating her efforts with the Arizona Dept. of Transportation, which operates the right-of-way where the kiosk is to be installed.

Besides the kiosk, Yazzie said Phase B will be the printing of 50,000 brochures for distribution at the park. The brochure will include information on the surrounding Navajo chapters, which has the communities excited about its release, she said.

The final phase of the projects is the installation of a new gateway sign, at the start of the Antelope Canyon scenic roads, just east of the Navajo Generating Station.

Further down the road, Yazzie sees development of a visitor center for her park.

"The visitor center is construction-ready, but we just don't have the funding to begin construction," Yazzie said. "It's one of the projects listed on capital improvement plans for the Navajo Nation.

"We'll see how that plays out," she said.

Reaching the $1 million mark was a challenge and one Yazzie said couldn't have been accomplished without her staff.

"I wouldn't have been able to do any of this without my staff. We've come a long way and we're still learning," she said.

The road to $1 million was narrow and less traveled, Russell said.

"It all began in 2003, when the department developed a five year strategic plan. The staff tried and accomplished something that was never done," he concluded.