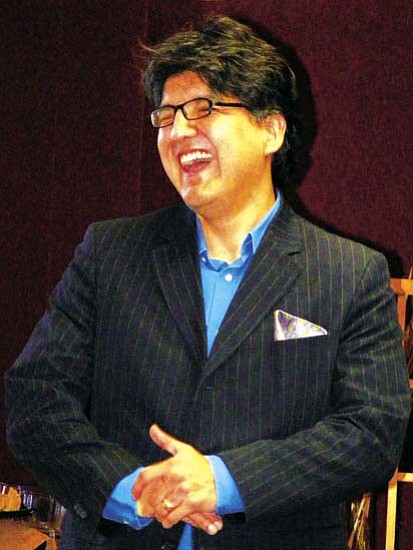 Though the crowd was mostly non-Native, Alexie did not disappoint in being honest, irreverent, poignant and deeply emotional describing how his early reservation life experience has provided much of the written research material that has brought him literary fame.

Alexie has won numerous awards for his writing, like the 1994 Lila Wallace-Reader's Digest award and a citation award winner for the PEN-Hemingway Award for Best First Book of Fiction.

His first novel "Reservation Blues" received the Before Columbus Foundation's American Book Award and he was named as one of Granta's Best of the Young American Novelists.

He has been described by other noted Native writers, like Leslie Marmon Silko, "Make no mistake, Alexie's talent is immense and genuine ... he is one of the best writers we have."

His fictional murder mystery, "Indian Killer" was noted by the Boston Globe as "startling and dazzling, with impossible to anticipate moves ... Sherman Alexie has become quite clearly an important voice in American literature."

Alexie, 42, spoke about "living Indian in a contemporary world, because living with contradictions is a tough job."

He described himself "as the Brad Pitt of the book world, but to the rest of the real world, I'm Ernest Borgnine."

He also said he finds Indian arrogance not only intolerable, but funny.

When he takes himself too seriously, he said he is sure that other people wonder what is wrong with him thinking "he is carrying the burden of his race."

He poked fun at everyone in the audience, leaving no one out - particularly vegetarians and Republicans. When he described being raised on government food with mysterious generic labels, he said he could tell the Navajos in the NAU audience were "getting emotional" which brought much laughter.

Gary Hubbell, Navajo, a counselor from Tuba City said, "I have read both 'Indian Killer' and 'The Lone Ranger and Tonto Fistfight in Heaven.' My son Chase has received Alexie's book, 'Diary of a Part Time Indian' as a gift. Chase started asking me about my own reservation experience and how it compared to his books.

"My son and I both could relate to the books because my own family left the reservation to get a better education. Alexie gave the message that in spite of the shortcomings and barriers that an individual can face, that anyone has the ability to succeed. This is the reason that my son and I wanted to hear Alexie in person," he added.

Alexie also made comments on what progress he thinks has been made in terms of cultural enlightenment from non-Natives about American Indians, and he said it was all summed up for him when he was driving past the Sandia Pueblo Casino sign in New Mexico and the marquee said "Carrot Top to Appear."

He also said that because Natives are thought to have such spiritual, secret-sacred internal knowledge, that they are supposed to be above normal human thoughts and reactions, like lusting after non-Native women.

Not so, according to Alexie.

"I am a feminist male," he said. "I use my peripheral vision if I want to look at a beautiful non-Native woman. Don't blame me, I say. You brought them here. I suffer from colonial lust. "

Alexie, who lives in Seattle with his wife and two sons, was last in Flagstaff eight years ago.

Book sales for his work were brisk. Many of the evening's purchases were made specifically by attendees to get Alexie to sign their copies, which he graciously did for virtually hundreds of fans who patiently waited in line.

Brenda Norris, Navajo, a special education counselor, said, "With the world the way is right now, with the economy and the war still ongoing [and] all the negativity, it was wonderful to hear Alexie's special brand of humor. He has courage to say how Natives are perceived wrongly or negatively, that the world doesn't understand that while Natives have centuries old tradition and culture, we are also very contemporary people. I found his lecture so refreshing."

Alexie's lecture, "Without Reservations: An Urban Indian's Comic, Poetic and Highly Irreverent Look at the World" was part of the NAU Speaker Series "Voices to be Heard."

Cynthia Kosso, Chair of the History Department at NAU, organized the event. Dr. Lomayumtewa Ishii, Hopi, a professor at the Applied Indigenous Studies Department, assisted Kosso by partnering with other NAU departments to obtain additional funding.

Other organizations within Flagstaff also supported his fee.