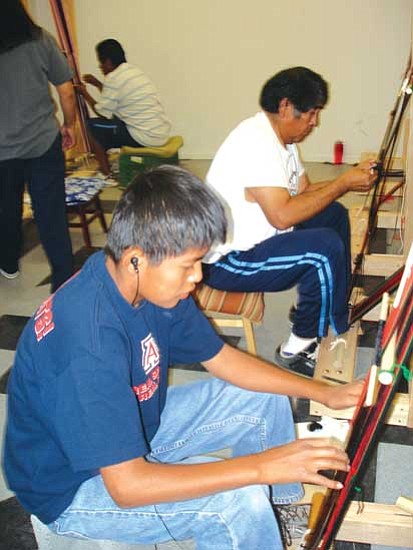 <i>Photo by Rosanda Suetopka Thayer/NHO</i><br> A couple of students work on traditional weavings in master weaver Marvin Pooyouma's Hopi belt-weaving weaving class, which is a part of the Hopitutuquiki art school. Each student learned&#160;how to set up a&#160;traditional loom, design and finish an entire Hopi&#160;men's traditional red-black-green belt within their two week session. Pooyouma is from the village of Hotevilla.

HOTEVILLA, Ariz. - Attendance at a culturally oriented summer arts program called "Hopitutuqaiki" is in so much demand for local Hopi and non-Hopi student attendees, there is now a waiting list for several of the classes being offered this summer, from June to August. The art being taught is based largely on Hopi values.

The 2009 Hopitutuqaiki student age range is from three years old for the Hopi language arts based preschool to about 60 years of age for the Hopi sifter basket class and new quilt making partnership class. The class has partnered this year with Lorrie Peterson of Sedona, who is considered a "master quilter. Peterson brings with her sewing experience from her award- winning Arizona Quilters Association - the "Red Rock Quilters.

All of these classes are small in size from about two to 10 students, allowing for a personal one-on-one dialogue with the master teacher that is assigned to each studio workshop-classroom.

Average cost for each session of classroom instruction runs from $60 for the Art for Kids class to $120 for the Hopi Knowledge for Boys to $240 for either the Hopi language preschool, weaving and Hopi cooking classes as an example.

The Hopitutuqaiki summer arts program is the brainchild of Dr. Robert Rhodes of Hotevilla who has done extensive educational research on Hopi students and how their learning strengths are at their optimum when using their own language and cultural learning styles.

Now in its fifth year boasting an overabundance of interest from new enrollees, Hopitutuqaiki is not only a success story in the local northern Arizona art scene but is well on its way to completing its final mission which is to go from a summer program to a full-on arts magnet school that can provide year-round artistic and academic education for Hopi children.

Based on its mission statement, "A flower grows best in its own plot of Earth," the Hopitutuqaiki Board takes that to mean that students can learn skills that will allow them to flourish in any physical or social environment they may find themselves in at any time in their lives.

Rhodes states, "Past and current research has shown the strengths of Hopi students. However, the dominant educational system has never recognized that Hopi children were educated long before schools came to Hopi. Parents and other relatives provided individual education to children, guiding and directing them to become responsible and productive adults for centuries before the [federal] government came along to build schools and provide educational programs derived from a European model. Hopitutqaiki is currently only fulfilling only part of its final goal ... Our board would like to develop a full educational program based on the language and cultural strengths of Hopi by providing a year round artistic and academic program."

"I have learned so much from being in a small class - only four of us, for my Hopi sifter basket class. I got to know our master teacher, Lena Banyacya over the two-week period and she was so patient with all of us because none of us had ever woven a basket before. I know I should have been able to learn this traditional art from one of my aunts, or grandmothers, but I wasn't around on the reservation to learn this at an age appropriate time. So now, I really want to learn how to weave and the tuition price was so reasonable. I didn't mind the drive from ... Moencopi to Kykotsmovi ... to learn something that will stay with me the rest of my life. I was so pleased with my first successful basket. After I finished trimming the final edges, I just smiled all the way back to Moencopi." said first year student Loretta Goldtooth.