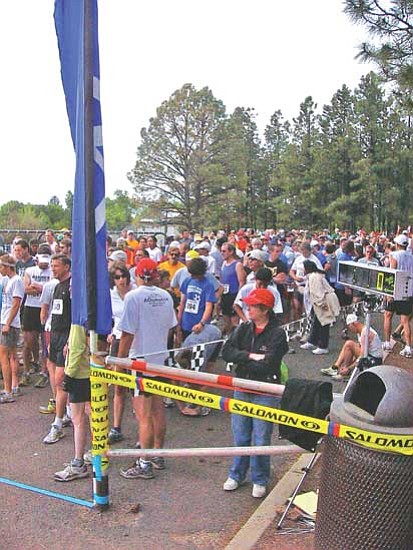 <i>Photo by S.J. Wilson/NHO</i><br> A large crowd of 10K contestants gather at the starting line for the 26th running of the Sacred Mountain Prayer Run.

FLAGSTAFF, Ariz. - The San Francisco Peaks are held sacred by 13 Arizona tribes, and amazingly, people from around the world are aware of this fact.

When asked why, Rain answered matter of factly, "Because it's the Sacred Mountain Prayer Run. I like and respect Native American cultures. I've been interested in Native American issues since I was a student in Japan."

The group Native Americans for Community Action (NACA) sponsored its first Sacred Mountain Prayer Run in 1983 at Ft. Tuthill - with 45 runners. This year more than 300 runners participated in the 10K, 5K or 2K events.

Tim Davidson, an Anishinabi who now lives in Apache Junction, also came for the spiritual aspects of the race.

"I wasn't raised traditional," Davidson said. "I've lived in the contemporary culture for the past 25 years - over half my life. Growing up, I was told that all of the Indians are dead or living in Oklahoma."

Davidson ran alongside Steve Darden, Diné - who started the 10K and 5K events with a note from an eagle bone whistle, and who carried a sacred staff in his own effort. At one point, Darden passed the staff to Davidson.

"It meant a lot to me to run with the staff," Davidson said.

Bruce and Tom Hatathli traveled from Tuba City to make the race.

"I enjoy running the hilly course," Bruce said. As for snowmaking, Bruce said, "I'm really not for that."

Hopi artist Coolidge Roy and sons Geddy and Dion were also among the runners.

"I came for the exercise, and I brought my boys out to experience competitive racing," Roy said.

But he also came in recognition and support of the sacred Peaks that overshadow the event. When asked how he felt about the ongoing efforts to protect the San Francisco Peaks from the use of reclaimed water, Roy made his feelings clear.

"I want them to just keep it sacred and pure as much as possible, so that way our Kachinam will send more rain to the region."

"I enjoy getting out over the summer and seeing people running their hearts out," said Geddy.

Dion also enjoyed the race, and found it challenging.

NACA literature describes the history of the race, noting that "the steep terrain mirrors the struggles we all endure in our lives, so that when the runner reaches the top, there is no happier feeling than to have overcome that obstacle and feel that sense of accomplishment."

The proceeds from the race benefits NACA programs and clients with emergency needs.

Although this was his first run in "a long time," Roy has supported the race through the donation of his artwork - donating kachina dolls that serve as awards.

This year, Roy's rendering of the Talavai Kachina, or Morning Kachina, went to the Overall Male 10K Award winner.

"[The Talavai Kachina] appears ... on the rooftops singing songs, waking the people in the village," Roy explained. "He often stands holding a spruce tree and ringing a bell. He appears at the village during the Powamuya Ceremony."

The tradition of running for a purpose is held by many tribes. One belief is that if one is to live a long, healthy, productive life, one must rise to run before dawn - a time when many believe the Holy People shower blessings on the Earth Mother.

As many run the challenging course over steep hills studded with fragrant ponderosa pines, the San Francisco Peaks is their major focus. This year's race was especially poignant as informed runners realized that the sanctity of these sacred Peaks lay in the hands of the Supreme Court as area tribes once again challenged the Arizona Snowbowl's intention to expand ski areas and make artificial snow out of treated wastewater.

By the morning of June 8, word spread throughout northern Arizona that the Supreme Court denied the petition for a second time. This action leaves the decision of the 9th Circuit's en banc panel standing - that "the only effect of the proposed upgrades in on the Plaintiffs' subjective, emotional religious experience. That is, the presence of recycled wastewater on the Peaks is offensive to the Plaintiffs' religious sensibilities...the diminishment of spiritual fulfillment - serious though it may be - is not a 'substantial burden' on the free exercise of religion." In summary, the Court summed up that the only harm Native Americans would suffer would be "damaged spiritual feelings."

There is still hope, as long as feet still move along in prayer. The Obama Administration has the authority to stop the development. And one can be certain that next year the Sacred Mountain Prayer Run will send powerful energy to the sacred mountains that overlook northern Arizona.