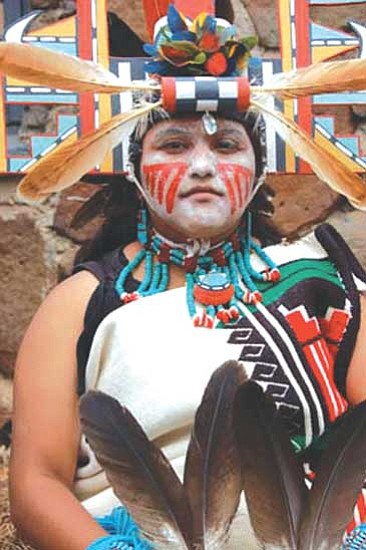 FLAGSTAFF, Ariz. - Summer is the time of ceremonial dances, growing corn, and monsoon rains for the Hopi people. And for the last 75 years, summer has also been the time that this hardworking and spiritual people come to Flagstaff to share their art and culture. This July 4-5, the Museum of Northern Arizona (MNA) will open its doors for its 76th Annual Hopi Festival of Arts and Culture, "the Oldest Hopi Art Show in the World."

The museum comes alive with the sights, sounds, and tastes of the Hopi people - evoking the very spirit of this Colorado Plateau culture. Explore Hopi beliefs and current issues with Heritage Insights talks. Enjoy meeting over 75 artists from the 12 Hopi villages, presenting centuries-old art traditions kept alive through contemporary innovations. And hear Casper and the 602 Band's riveting Hopi reggae under the big tent.

The Hopi village of Orayvi is considered the oldest continuously inhabited settlement in the United States, dating back more than a millennium. The Hopi have survived in their mesa homeland for centuries and although their culture is changing, their core values remain intact and central to their culture. At the Hopi Festival, these values are expressed in many ways.

Museum Director Robert Breunig said, "This year's Hopi Festival will honor the life and career of  noted katsina doll carver Ernest Moore Jr. (1934-2008) with a display of his work. He came to carving late in life and his exceptionally fine work elevated him to a master artist level in a very short time. He was a recognized Hopi Festival artist for many years, including at last year's event. His skillful eyes and hands will be missed in the art world, as well as the twinkle in his eye and his friendly nature."

Heritage Program Coordinator Anne Doyle continued, "We're really excited about a new addition to the festival. Kachina doll carver and poet Ramson Lomatewama has worked at the museum for many years as a demonstrator and educator. His more recent artistic interests have led him to glass blowing. This year he'll be outside, demonstrating how he creates his glittering, glass blown spirit figures."

Also new this year will be a chance to meet author Stewart B. Koyiyumptewa. With seasoned American West history author Carolyn O'Bagy Davis, he has coauthored The Hopi People, part of Arcadia Publishing's Images of America series. Koyiyumptewa is a member of the Badger/Butterfly Clan from Hotevilla on Third Mesa and has worked for the Hopi Cultural Preservation Office as the tribal archivist for the last eight years. Through a collection of remarkable photographs, the outside world will have a rare look into this unique culture. A book signing with Koyiyumptewa is scheduled on Saturday from 10 a.m. to 2 p.m. and the book is on sale in the museum's bookstore.

The nuances of making Hopi basketry will be revealed by Ruby Chimerica and her daughter Anita Koruh, as they present an ongoing demonstration on weaving baskets, cradleboards, and rattles from sumac and rabbitbush.

A dynamic artist in his own right, Ed Kabotie is grandson and son to two noted artists, Fred and Michael Kabotie. Ed Kabotie plays acoustic guitar and Native flute, while incorporating teachings about the Hopi language and its history into his music. He sings in Hopi, Tewa, and English in his trilingual compositions.

Bob Rhodes and Breunig will share their knowledge of Hopi basketry. Rhodes is director of Hopitutuqaiki, the Hopi School's Summer Arts Program, and Breunig is the museum's director.

Clark Tenakhongva will talk about katsina doll carving - the history of the art form, the spiritual aspects of katsina dolls, and what the carvings represent.

Gary Tso, owner and operator of Left Handed Hunter Tours, is an energetic speaker who will talk about Hopi culture, Hopi clan migrations, the story of the four worlds, and the Europeanization of Hopiland.

Under the big tent

Only on Sunday at 1 p.m. and 4 p.m., Casper and the 602 Band will perform their high energy, Jamaican-inspired reggae combined with Native roots. Casper Loma-da-wa's lyrics are filled with hope and power, telling stories of contemporary reservation life. "Reggae," he says, "is the music of a struggling people - that's what Jamaican music is. We, as Native people, have been struggling all these years." The band has opened for reggae greats such as the Wailers, Culture, and Burning Spear.

The Nuvatukya'ovi Sinom Dance Group will perform the Polhikmana or water maiden dance, and the koshari or clown dance to unite people and make them happy. They will also perform a Supai dance celebrating the Havasupai people. All of the dance troup's regalia - the clothing, weaving, and tabletas or headdresses - is designed and handmade by the dancers, and all of the outfits have cloud designs for rain.

On Saturday only at 11 a.m., organizer and designer Maya David will return this year with her team of seamstresses and models from throughout the Hopi Mesas to present a fashion show of Native inspired creations.

Sidney Poolheco and Sandra Hamana will perform traditional Hopi songs, while capturing elements of change in the Hopi culture through contemporary tunes and lyrics. Poolheco's music is often featured on KUYI 88.1 Hopi Radio.

Quilting was introduced to Hopi women over 100 years ago by Mennonite missionaries. Since then, Hopi quilters have incorporated cultural symbols and designs to make quilts that are uniquely their own. Today quilts are contemporary works of art and have become part of the Hopi matrilineal society, given at special occasions such as weddings and baby naming ceremonies. A number of quilts will be on display and available for sale at the festival.

In addition to the 75 booth artists, the Museum staff has made several trips to the Hopi Reservation to collect one-of-a-kind consignment items for sale from individual artists. The collecting trips have always been an important part of the Hopi festivals, allowing artists who produce only a few items per year, or who might not have transportation to Flagstaff, a chance to market their work. Hundreds of distinctive art pieces such as quilts, rattles, pottery, katsinas dolls, paintings, and baskets are for sale at this year's festival.

While enjoying entertainment under the big tent, take a taste of ages-old traditional Hopi foods-yeasted bread baked in an outside wood-fired bread oven, and piki, a ceremonial food made from blue corn. Alice Dashee, a potter and educator, will give presentations all day on both days about the role of corn in Hopi culture.

Award-winning potters Dorothy and Emerson Ami take visitors on a pottery making journey, discussing how they collect materials and build, decorate, and fire pieces. They create pottery in the ancient traditional way, from gathering the clay to using all natural pigments to paint their pots and sheep dung to fire their creations.

Sash weaving will be demonstrated by Louis Josytewa. All types of Hopi weaving are done by men. The long, colorful sashes that Josytewa makes are primarily used as part of ceremonial clothing.

Always popular with families, the Creative Corner outside in the courtyard will be the place for kids and the young at heart to decorate Hopi birds, work with clay, and play a Hopi hoop game.

KUYI Hotevilla, your Native American public radio station and a project of the Hopi Foundation, will be onsite for a live report broadcast.

The Nuvatukya'ovi Sinom Dance Group will be in Flagstaff's Fourth of July Parade on Saturday morning, and downtown at Heritage Square in a free performance following the parade. On Sunday at noon, they will again perform at Heritage Square.

The 2009 Hopi Festival of Arts and Culture is sponsored by the Arizona Commission on the Arts, National Endowment for the Arts, Arizona ArtShare, Flagstaff Cultural Partners, BBB Revenues from the City of Flagstaff, Arizona Humanities Council, and Blue Cross Blue Shield of Arizona.

The Museum of Northern Arizona sits at the base of the San Francisco Peaks, three miles north of historic downtown Flagstaff on Highway 180. Festival admission is $7 adults, $6 seniors (65+), $5 students, $4 Native people, $4 children (7-17), and free to MNA members. Become a member today in time to attend the Hopi Festival Members' Preview, Arts Award Ceremony, and Silent Auction on Friday evening, July 3, before the festival. For more information, go to musnaz.org or call (928) 774-5213.