Editorial: No room for the red man in a black and white world 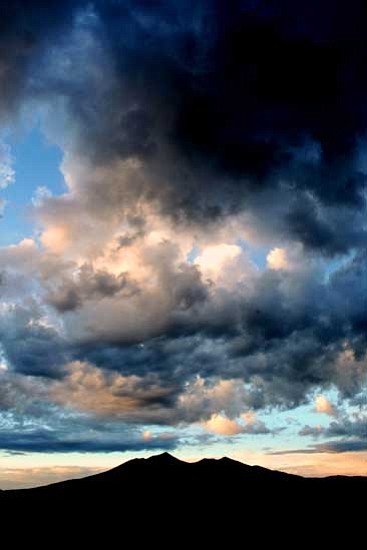 Well, it appears as if the Almighty Dollar has won out once again and the religions of many Native Americans have been shoved to the wayside. Last Monday, the U.S. Supreme Court decided not to hear an appeal filed in January by the Navajo Nation and other tribal and environmental groups that ultimately would have protected the San Francisco Peaks from further development by the Arizona Snowbowl Ski Resort.

This comes to light after the state of New Mexico placed Mt. Taylor - another mountain held sacred by at least 30 tribes - on their State Register of Cultural Properties on June 5 to protect it from exploratory drilling and possible uranium mining. Incidentally, both Mt. Taylor and the San Francisco Peaks are used by tribes from both New Mexico and Arizona as a place of worship.

At the center of this controversial issue is the fact that the Ninth Circuit Court's previous ruling states that use of reclaimed sewage water to make artificial snow wouldn't "substantially burden" a tribe's exercise of religion, as defined in the Religious Freedom and Restoration Act (RFRA). The Act also states that if there is a substantial burden on the exercise of religion, then there must be a "compelling public need" that outweighs the religious burden in order for this decision to be reversed. So what is the burden, you may ask?

The claim says that using reclaimed sewage water for snowmaking won't affect any religious ceremonies that tribes wish to conduct on the Peaks and that the sacred mountains would still be accessible to tribes to conduct such ceremonies. Opponents, however, have been saying all along that it's basically like saying the Catholic church (or any church, for that matter) can substitute reclaimed sewage water for holy water and continue to conduct their religious ceremonies without subterfuge. That's pretty much saying that "water is water" and that those ceremonials that require the use of holy water won't be affected.

Visually, the Peaks may not look like a church, but they are revered and sanctified as such by the different tribes. Just because it doesn't look holy or sacred at first glance, it's perfectly understandable why most people see the Peaks as just another mountain. If that is indeed the case, then the Vatican is just another church.

With that in mind, the Arizona Snowbowl Ski Resort is proposing to expand its facilities on the Peaks in order to prolong their annual ski season in Flagstaff. Snowbowl general manager J.R. Murray claims that if they make artificial snow using reclaimed sewage water, then there will be "predictability" that Snowbowl will be open each year.

Consequently, Snowbowl is proposing to cut down between 80-100 acres of pristine forest, install an additional ski lift and build a 14-mile-long pipeline to transport reclaimed sewage water up to the ski area to produce artificial snow for skiing.

While J.R. Murray and many other non-Native people may be excited about boosting the local economy and are probably having visions of dollar signs dancing in their heads, there are a lot of concerned people, including much of Flagstaff's Native American population, that are asking, "At what cost is this profit going to be made?"

While it's commendable that the Chamber of Commerce and others are looking to bring more tourism dollars to Flagstaff, are they willing to sacrifice the many cultural, artistic and economic contributions of Flagstaff's Native American population to further their own interests? Who will ultimately benefit? And again, at what cost?

Clearly, this is a sad occasion for the 13 tribes in Arizona and New Mexico who treasure the sanctity of the Peaks as the Almighty Dollar has once again usurped their tribal religious beliefs. What happens next remains to be seen.