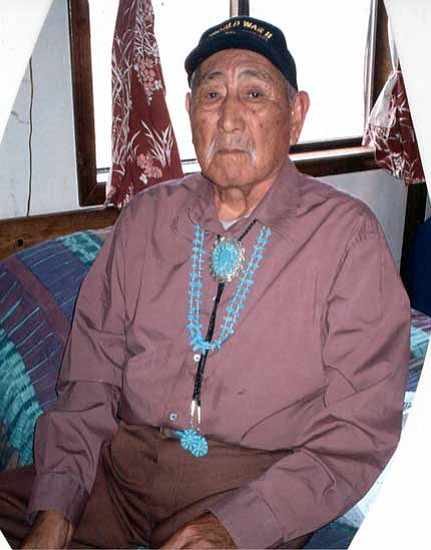 WINDOW ROCK, Ariz. - For the third time in two weeks, Navajo Nation President Joe Shirley Jr., has conveyed his condolences to the family of a Navajo Code Talker who died Monday.

Willie K. Begay, who was ill with cancer, died Monday, said his daughter Kristy Kescoli Begay. He was 88.

"It is with greater sadness that we bid farewell to [another] honored Code Talker," President Shirley said. "It is with deep regret that we learned of the passing of Navajo Code Talker Willie K. Begay, yet another of our distinguished warriors from World War II who passed away on Monday. As a young man, he answered the call of the country, joined the Marines and left his home to defend the United States at great personal risk."

He was sent to Camp Pendleton for special military qualification and training as a code talker.

He served with the 3rd Marine Division Signal Corps and was overseas for 11 months. In 2001, he received a Congressional Silver Medal in recognition of his service as a Navajo Code Talker.

After his military service, Begay worked for the Pinon Trading Post from 1946 until his retirement in 1984.

"The Navajo Nation is deeply saddened by the loss of another treasured Navajo Code Talker who sacrificed so much for his people and his country," Speaker Morgan said. "I ask that we all take a moment to reflect on the significance of Mr. Begay's, and all other Navajo Code Talkers', contributions to the liberty and freedom that we all enjoy today."

"Our Navajo Code Talkers remind us that our Diné language has always been our strength and key to survival," Speaker Morgan concluded.

President Shirley has ordered flags on the Navajo Nation to be flown at half-staff until sundown June 6 in honor of Begay.

"Begay was a renowned Navajo Code Talker who served the United States of America, the U.S. Marine Corps, and the Navajo Nation during World War II with courage, honor and distinction," President Shirley said in a proclamation issued Thursday.

"I was deeply saddened by the news that we have lost yet another of the Code Talkers who did so much for this Nation," she said. "My heart goes out to Mr. Begay's friends and family."

She said it was fitting that Willie Begay passed away on Monday, Navajo Nation Memorial Day, a day set aside to recognize those Diné who sacrificed so much to keep Americans safe.

"We owe him and all those who provided such heroic service a debt of gratitude that cannot be repaid by just one day to honor their memory," she said.

"The Navajo Nation is greatly saddened by the loss of the late Willie K. Begay," President Shirley said. "The Navajo Nation unites and offers prayers and deepest condolences to his family during this time of grief."

Funeral arrangements for Begay are being handled by the Tse Bonito Mortuary of Tse Bonito, N.M. A gravesite funeral service will be held at 10 a.m. Friday, June 5, at the Terresa Little residence in Forest Lake and officiated by the Forest Lake Bible Church. Burial will be at the family cemetery.