Hopi grads told to make the most of their opportunities 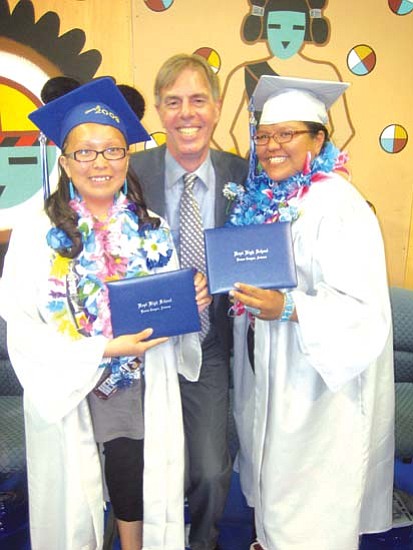 Hopi High Principal Glenn Gilman made the public announcement May 21 during Hopi High School's graduation ceremony as hundreds packed into the gym due to rainy weather.

Principal Gilman called the reaccreditation a major accomplishment because it means that those who graduate from Hopi High will be recognized as meeting rigorous high school standards.

He praised the seniors from this year's class for achieving academic excellence. The QAR team praised Hopi High for meeting academic objectives and for having more extra-curricular activities than most high schools.

Principal Gilman noted that Hopi High School has met Adequate Yearly Progress for the past four years and has also met Annual Measurable Objectives by meeting necessary scores in reading, writing and math.

He also praised this class for crossing the digital divide through its one-to-one computer program where each senior received a laptop to work on during the school year. Principal Gilman noted many of this year's graduating classes accomplishments including 10 members of the National Honor Society had shown scholarship and service to the community by working with NHS, boys cross country had won four state championships helping Hopi High boys reach 19 consecutive state titles and the girls cross country won two state championships.

He also pointed to Matthew Mora and Chantal Benally for obtaining the Gates Millennium Scholarships, which will pay for their college tuition and expenses.

There were 113 seniors who graduated this year. Alyssa Fredericks and Shari Farrington served as the keynote speakers.

Fredericks focused on encouraging the graduates to continue their education and have high goals. For example, she watches commercials that urge people to become dental or medical assistants.

"But why not become the doctor or the dentist or the professional?" she asked. "We lack services at home and we need people with degrees for those services. We need to have higher expectations."

Farrington, executive assistant and field representative to U.S. Rep. Trent Franks, recognized Hopi High art student Lancisco Omahoya for placing second in a congressional art contest where he was one of 175 contestants.

She encouraged the students to keep submitting work in the art contest because the champion receives $1,000 along with a free trip to Washington, D.C. She also praised Hopi High art teacher Mary Duwyenie, saying Omahoya would not have won without her help.

Valedictorian Kelly Keith, who is Anglo, noted that she was born and raised on the reservation.

"I proudly call Hopi home," she said. "It was a privilege to grow up here and it taught me to appreciate diversity."

Keith said each of the graduates is passionate and determined. She said the seniors went through some tough times during school as their strength and will were tested. She said this class will have many accomplishments as they will become doctors, lawyers, teachers and tribal leaders.

Keith will attend the University of Arizona on the Wildcat Scholarship.

Co-salutatorian Matthew Mora, who will attend Cal State at Los Angeles on the Gates Millennium Scholarship, thanked his teachers.

Mora, who also thanked his parents, said when he sees elders running in the morning that it gives him confidence.

"I learned the ... culture from the elders," he said. "I choose not to use drugs and alcohol. The Hopi way is to live a long healthy life."

Co-salutatorian Tate Jensen, who will attend the University of Arizona, said the graduates are now adults as they take on the challenge of becoming somebody.

"This is a time for a beginning," she said noting that the graduates will be getting their driver's licenses, going off to college, or going to work.

Jensen said she hopes her classmates make the most of their opportunities.

Miss Hopi High School Humewysi Sockyma told her classmates to maintain enthusiasm for their work, respect values, never be impatient and never be easily offended, but emphasized that they should be independent thinkers.

Alyssa Lomatawaima, student body president, read a poem saying their time has arrived and they are free to choose their future because it is their time to shine.

Evanna James, president of the class of 2009, told her classmates that they have something to offer to the world and presented senior class advisor Lavonne Adams with roses.