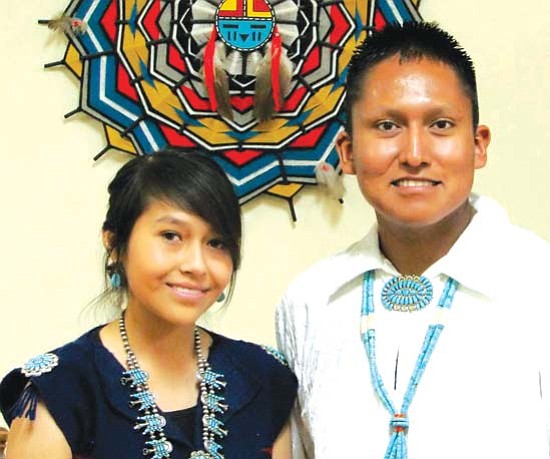 Karen Lee is the salutatorian of the Class of 2009. She graduates with a cumulative grade point average of 3.85. Karen lives in Lupton with her parents Dolores and Melvin Lee and her two brothers. She plans to attend Arizona State University and major in Business Communications.

Graduating with a 3.96 cumulative grade point average, Jason Alfred Curley is the valedictorian of the Class of 2009. A resident of Ganado, Jason is the son of Yolanda Curley and the late Henry Curley and the stepson of Peter Lincoln. He has one older sister. Jason will attend Dartmouth and plans to major in Native American Studies or Political Science.

Stacey Ben and Jason Curley were recipients of the Melinda Shepherd Memorial Scholarship. The Sister Katherine Barrett Award was presented to Karen Lee. Cherish Seaton received the Sister Mary Honora Award and Jason Curley was the recipient of the Saint Katharine Drexel Award.

St. Michael Indian School provides students from local Native American communities with a quality education that is rooted in Catholic values, is sensitive to Native heritage, teaches leadership skills, and enables students to contribute in a culturally diverse world.