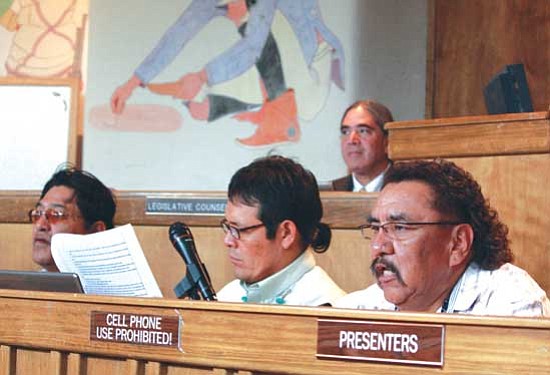 WINDOW ROCK, Ariz. - Last Thursday, the 21st Navajo Nation Council tabled a measure that would have repealed the Diné Fundamental Laws - a codified set of laws based on centuries-old Navajo traditional values and customs. The measure was tabled until the fall session with a vote of 48-21.

Council Delegate Raymond Joe (Tachee/Blue Gap/Whippoorwill) introduced the measure during the final day of the council's summer session. He and others cited that these laws, which are primarily meant to govern the upbringing of Navajo youth and promote balance and harmony among Navajo people, are being abused and misinterpreted by Navajo lawmakers in order to promote their own political agendas.

The laws, codified in 2002, provide no guidance on how they should be used or applied.

Generally, if the Western statutes are unclear, then Navajo judges are free to apply the Diné Fundamental Laws to decide cases.

However, Council Delegate Katherine Benally (Dennehotso) explained, "Many judges do not have knowledge or limit knowledge of our language and culture therefore they call on others to interpret and the outcome of those decisions are inconsistent from district to district."

The Diné Fundamental Laws lie behind traditional knowledge held by Navajo elders and medicine men, who are sometimes called in to testify in a case where the judge is required to have a working knowledge of the laws, or at least be fluent in Navajo in order to interpret the practicality of the laws, which are meant to create peaceful solutions.

The measure introduced by Joe was unclear as to whether or not the Navajo judicial system would be affected if the Diné Fundamental Laws were repealed.

In his presentation to the council, Joe stated, "In the beginning the law was clear and thought out. [It] was clear and it had propose in that our tradition and way of life would be understood. This law is still good but people are misusing it, misinterpreting it and abusing it today."

Benally added, "Our elders ... never intended for our language to be put into writing and used against us. My biggest concern it that this law the way it is being implemented hurts [us. It] creates more division among family and even within our Nation."

The case is scheduled to go before Navajo Supreme Court Justice Herb Yazzie, one of the primary authors of the Diné Fundamental Laws.