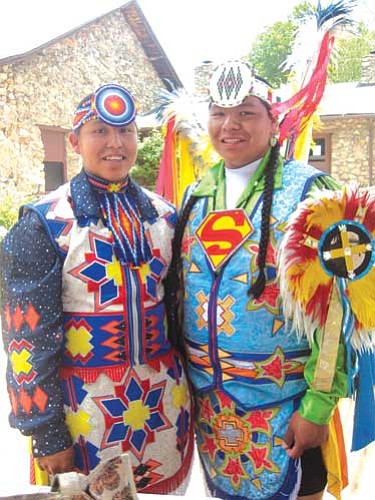 PRESCOTT, Ariz. - Hopi and Navajo artisans were at the forefront of the 12th annual Prescott Indian Art Market July 11-12 at Sharlot Hall Museum in Prescott.

Scott and Sampson Sinquah, who attend Hopi High School, electrified the crowd with their hoop dances. Of course, their father Moontee Sinquah is hard to match when it comes to the hoop dance since he holds the 2008 Senior World championship for the hoop dance. So after his sons warmed up the crowd, Moontee gave the grand finale.

If the Sinquahs own the hoop dance their equal in glass blowing art is Ramson Lomatewama who also drew applause from the crowds for his art form. Lomatewama is known for his kachina doll carvings and jewelry, but has recently added creating glass kachinas and other Hopi ceramics in glass.

Lomatewama discovered glassblowing while teaching Hopi culture at the Rockwell Museum in New York in the late 1990s. He subsequently trained with world-renowned glass artist Chischuly. Respectful of Hopi tradition that restricts males from working in clay, Lomatawaima viewed glass blowing as a way to express his interest with Hopi pottery.

He began blowing glass pottery before adding glass kachinas to his work. He said a flower created in glass can take just 10 minutes, but making a corn maiden is a 30-40 minute venture.

Born in California, he was raised in Flagstaff and Third Mesa on the Hopi Reservation. His works can be obtained at Hotevilla Glass Works.

The other award winners were:

Manygoats grabbed first place honors in the sculpture and carving category with his summer butterfly belt. The piece took seven months to make.

The butterflies on the belt are made of mother pearl, malachite, red, orange and purple spiny oyster and others.

"I'm honored to receive this art award because there's a lot of good competition here," he said.

Manygoats' work can be found at the Heard Museum. He resides in Tohatchi, N.M.

Garcia took home a Judge's Choice Award for his ceremonial necklace created from white clamshells and turquoise jaw claw. This piece is going for $1,500, but for those looking for something less expensive he has other necklaces, earrings and rings.

The winning piece took him one month to complete.

Garcia, who is from Santa Domingo Pueblo in New Mexico, said he learned his craft from his father Addeliando Garcia. He started learning jewelry when he was 13-years-old.

Garcia serves as the chairman of the Santa Domingo Arts and Crafts Market, which will be held during the three day Labor Day weekend at Santa Domingo.