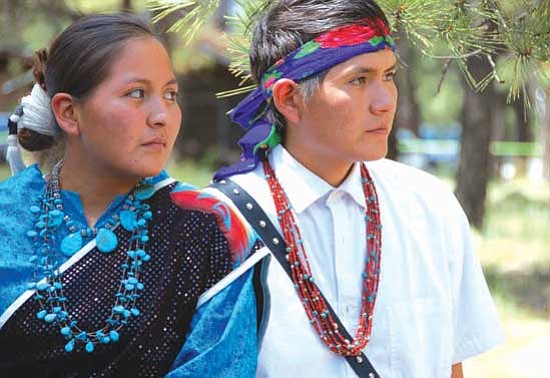 FLAGSTAFF, Ariz. - In Navajoland, inspiration for the fine arts comes from the wide expanses of earth and sky that are sacred to the Diné people. This year's 60th Annual Navajo Festival of Arts and Culture at the Museum of Northern Arizona in Flagstaff, on Saturday, Aug. 1 and Sunday, Aug. 2, will focus on the collectible coiled Navajo pottery and the intricate rug weaving for which this culture is known.

Seventy-five Navajo artists will travel to the festival from all corners of the Navajo Nation, as they have done for the past six decades, continuing the tradition of bringing their artwork to market and sharing what makes their artwork distinctive. Two days of cultural immersion with prominent musical performers, a traditional dance troupe, and Heritage Insights talks give an inside look into the largest Indian tribe in the Southwest.

The focus of this year's festival

Museum Director Robert Breunig said, "This year's Navajo Festival will honor the life and career of William T. Beaver (1925-2009) who was particularly important in bringing Navajo pottery into the mainstream, as it was nearly obsolete by the 1940s. At his Sacred Mountain Trading Post on the way to the Navajo Reservation, Beaver encouraged many Navajo potters to try new forms to attract the attention of buyers. MNA is creating a new Navajo pottery installation in the Museum's Babbitt Gallery to highlight Bill Beaver's important role in this art form."

Award-winning potters Alice Cling and Sarah Natani will be showing visitors how they work the traditional local clay to form pots. Navajo pottery is produced entirely by hand via a simple coiling technique.

Coils are stacked until a desired height is achieved, then pinched and smoothed into final form. The surface is scraped and may be burnished with a smooth stone when it is partially dry. Raised decorations are sometimes applied. And when the pot has thoroughly dried, it is fired and when still hot, glazed with pinyon pine pitch that darkens the surface and leaves a soft gloss. This rich brown color and subtle sheen have become identifying characteristics of contemporary Navajo pottery.

Heritage Program Coordinator Anne Doyle continues, "This year's festival will also showcase Navajo weavers, whose art form has come to serve as a central source of cultural identity and creative expression. Remarkable weavers like D.Y. Begay, Morris Muskett, Melissa and Lola Cody, and the Ramah Weavers will be at the festival. TahNibaa Naat'aanii and her mother Sarah will be demonstrating on an ankle weaving, the table loom, and the traditional upright Navajo loom. TahNibaa Naat'aanii will also be giving a presentation on the importance of the shoulder blanket in Native cultures. There will also be ethnobotany walks, beading demonstrations, and Diné-inspired take-home craft making for kids."

The Navajo Creation Story tells us that Spider Woman and Spider Man (two of the Holy People who walked the earth at the dawn of humankind) introduced weaving to the Navajo. Spider Man constructed the first loom of sunshine, lightning, and rain. Spider Woman taught the Navajo to weave.

Non-Navajo scholars offer a different story of the origins of Navajo weaving. They tell us that upon the Navajo arrival in the Southwest, sometime between AD 1000 to 1525, the Navajo learned to weave from their Pueblo neighbors, most likely from the Zuni or Jemez people. Originally weaving in the Southwest was done with farmed cotton, but the Spanish introduced sheep to the area in 1698 and wool became the mainstay among weavers. Since the 1600s, Navajo weaving has been dominant in the Southwest, continuing to flourish and adapt over centuries with new patterns and motifs, materials, dyes, and techniques.

The Museum has installed a new weaving exhibit that will be changed throughout the year with examples of fine weaving from MNA's Navajo Textiles Collection. Titled Knowing No Boundaries: Adaptation and Imagination in Navajo Weaving, the emphasis in this gallery will be on the highly individualized expressions of this art form, allowing visitors to share in the weaver's view of the world.

Under the Big Tent

Radmilla Cody will serve as emcee under the Heritage Insights tent. Cody is a former Miss Navajo Nation 1997/1998 and winner of the Best Female Artist at the 2002 Native American Music Awards. Cody will showcase songs from her CD, Spirit of a Woman, using her stunning and emotionally-charged voice to sing Navajo songs and lyrics.

Canyon Records recording artists Burning Sky with Flagstaff's Aaron White, a Native American music award winner in 2004 for Group of the Year and a Grammy-nominated artist in 2003 for Best Native American Album, will perform their powerful original songs with acoustic guitar and Native flute. White's fingerpicking style and passion for songwriting has been building followers for 10 recordings and nearly 20 years.

The Pollen Trail Dancers will present storytelling dances meant to be performed in the warm season. Emcee Brent Chase accompanies the dance troupe with his humor and Navajo flute playing. The Sash Belt or Weaving Dance tells the story of Spider Woman's influence in weaving, the Basket Dance depicts the important role of baskets in Navajo life, and the Bow and Arrow Dance honors the warriors of old who have protected the Diné way of life.

Clarence Clearwater is a singer/songwriter who returned to the Navajo Reservation more than 27 years ago to learn to speak Navajo and to gain a better understanding of his people and their traditions. Today, his deep voice and stirring guitar can be heard on the Grand Canyon Railway as he entertains passengers. He sings traditional songs in Navajo and contemporary songs in English about his spirituality and the oppression of Native people.

Poet, painter, and consultant on Indian education and art, Gloria J. Emerson was educated in Navajo traditions and at Harvard University, and was a former artist-in-residence at the School of American Research and a former New Mexico State Arts Commissioner. She will talk about how landscape translates into art among Native people, share her personal reflections, and read from her book At the Hems of the Lowest Clouds: Meditations on Navajo Landscapes (2003).

Dr. Evangeline Parsons Yazzie, a professor of Navajo language at Northern Arizona University, will sign and read from each of her books. Winner of several book awards, Dzáni Yázhi Naazbaa': Little Woman Warrior Who Came Home is about a time of trial, for Dzánibaa' and the Navajo people, that gives her a profound sense of herself. Diné Bizaad Bináhoo'aah: Rediscovering the Navajo Language is a textbook to develop communicative competence.

Linguist Larry King will give a basic introduction of the Navajo language. His humorous reflections of the Diné culture in Navajo and English take his audience along a path of history and legend, and illustrate how Navajos use humor to cope with hardship in their lives.

One of today's most important painters, Shonto Begay is a visual storyteller whose creativity brings forth paintings of wonder, sadness, and truth about being Navajo and living on the reservation. Begay uses his art to reclaim his identity and will talk about the influence of water on Navajo culture and art.

Premiere weaver Morris Muskett is traditionally-inspired and self-taught. One of a few males who weave in the Navajo tradition, he is best known for his exquisite sash belts and small rugs with color and design innovations. Muskett will talk about woven art - both soft and hard - and share the techniques he uses to work in wool, cotton, cashmere, and silver wire.

The 2009 Navajo Festival of Arts and Culture is sponsored by the Arizona Commission on the Arts, National Endowment for the Arts, Coconino County Board of Supervisors, Arizona Humanities Council, Blue Cross Blue Shield of Arizona, and Canyon Records.

Now celebrating its 81st year, the Museum of Northern Arizona is one of the great regional museums of our world, surrounded by tremendous geological, biological, and cultural resources in one of Earth's most spectacular landscapes. With its long and illustrious history, MNA evokes the very spirit of the Colorado Plateau.

Become a member today in time to attend the Navajo Festival Members' Preview, Arts Award Ceremony, and Silent Auction on Friday evening, July 31, before the festival.