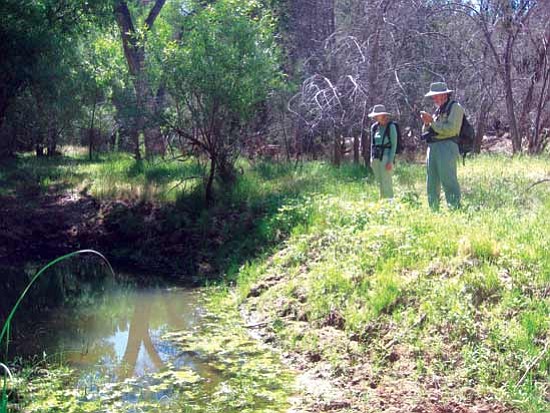 VERDE RIVER, PAULDEN, Ariz. - The Upper Verde River has a wildlife area so people can visit and decide for themselves if this river is worth saving. It's a big question because environmentalists consider the riparian area under siege.

This 796-acre wildlife area includes three miles of the Verde River and one mile of Granite Creek. The Arizona Game and Fish Department established the area for the protection and restoration of riparian habitat and its biodiversity.

Cottonwoods and willows are found along the river for hiking and viewing opportunities. The facilities include restrooms, picnic tables, interpretive kiosk, primitive trails and a parking area.

During a recent outing, Joanne "River Lady" Oellers and Prescott College's Walt Anderson were walking along the section known as the Verde River springs. There weren't any other humans walking this section on this given day, but there was plenty of life.

A multitude of birds, lizards, butterflies, dragonflies and fish make the river come alive. Not to mention the various flowers and huge trees that provide plenty of shade in the warm weather.

Evironmental heroes like Oellers and Gary Beverly from the Sierra Club are working hard to educate people in order ton protect the river.

As Anderson started to descend down a little canyon to the river, he spotted a Lesser Earless lizard and the nest of a rock wren. This was just the beginning of a river hike that would include spotting green heron, summer tanager and other colorful birds. The butterfly list included a cooperative red spotted admiral that posed for many photos, an orange sulphur and a morning cloak. The colorful orange Flame Skimmer and other dragonflies also made their appearance.

The Sonora Sucker and bass were seen through the clear river water.

Oellers' love of the Verde River comes from noting that it is one of the last free flowing rivers in Arizona.

"It's a reminder of a once vast river system," she said. "It supports a fragile wildlife and plant community."

Oellers said it is key to supporting the ecosystem of the Southwest.

Sierra Club's Gary Beverly calls the Verde River the last free flowing riparian area in Arizona as he says the Gila, Salt River, Santa Cruz and San Pedro have all mostly dried up.

"The Verde is the last one left and it has a dozen critters that are either endangered or have special concern," he said.

Beverly said this area is critical for wildlife habitat and a loss of water will cause a loss of habitat many miles down the river. He also notes that many people use the area for recreation.

"The Verde River is extremely valuable. It's worth saving and preserving," he said.

That is why Oellers and others recently formed the Save the Verde Alliance. Oellers was the leader of the Center of Biological Diversity's Prescott Office, which was taking action to preserve the Verde River, but the Prescott office closed down due to financial reasons.

Oellers said this gave environmentalists the chance to form the Save the Verde Alliance so environmentalists could take their advocacy to the next level. The newly formed group includes members of Citizens Water Advocacy Group, Sierra Club, former members of the Center for Biological Diversity and students from Prescott College, especially Heidi Black.

Environmentalists are concerned about the sustainability of the river. Thousands of people rely on the water from the river; people from Paulden to the Phoenix area as the Verde River winds 150 miles down to Horseshoe Dam.

Beverly, Oellers and others believe there are many threats to the Verde River, but the biggest two are uncontrolled growth and Prescott's proposal to pump more than 8,000 acre feet of water each year from the Chino aquifer.

Environmentalists say they will remain vigilant as they seek to protect the Verde River.

Out and about: Woodchute Trail: beautiful scenery in cool mountain air at 7,000 feet
A river runs through it - Mount Baldy
Out and About: Explore the peavine trail before it gets too hot
Environmental groups conflict on Renzi's support of environment
Fossil Creek designated as 'Wild and Scenic River'