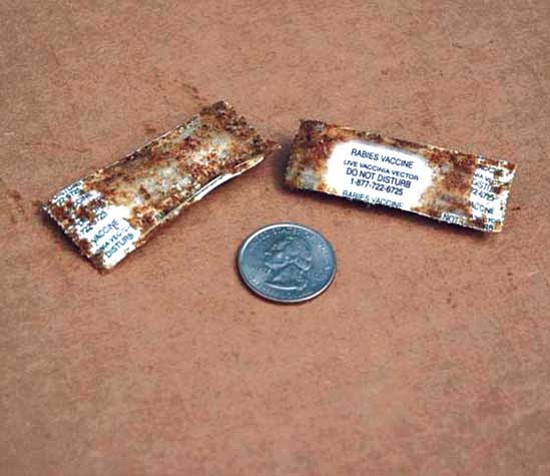 FLAGSTAFF, Ariz. - On Tuesday, July 7, the Coconino County Board of Supervisors approved an amendment to the Rabies Declaration of Quarantine which was originally enacted on April 7.

The amendment includes an extension of the Rabies Quarantine time period to August 13 and an expansion of the existing Rabies Quarantine area to extend in a 15-mile radius from the "Rabies Zone." The Rabies Zone, which is located primarily in Flagstaff and includes locations in Parks, is an area where there has been a substantial increase in rabies activity during the past eight months.

The original Declaration of Quarantine was enacted for three specific purposes.

First, it is intended to reduce the risk of rabies exposure to humans by placing restrictions on pet owners and pets in areas in and around Flagstaff. This action was deemed necessary due to a substantial increase in the number of rabid wild animals found in and around the Flagstaff area.

Third, to minimize the occurrence of pets eating the vaccination packets. The packets pose no harm to pets; however the intent of the Oral Rabies Vaccination (ORV) Program is to have the packets consumed by wildlife.

The Board's action to amend the existing Quarantine was a result of a request by the CCHD to allow for the implementation of a rabies vaccination program. The program will consist of two elements. One element is directed toward vaccinating the fox population in the greater Flagstaff area. The other element is directed towards vaccinating the skunk population in two large areas on the east side of Flagstaff.

The CCHD was recently notified that the Arizona Regional Office of the U.S. Department of Agriculture/Animal and Plant Health Inspection Service/Wildlife Services (USDA-APHIS Wildlife Services Program) received the funding to purchase oral rabies vaccination packets for gray foxes, the target species. The Oral Rabies Vaccination Program is an innovative program that uses an oral rabies vaccine to control rabies in wildlife.

Due to the history of the brown bat rabies variant in Flagstaff and the emergence of rabies in gray foxes in 2009, the USDA-APHIS Wildlife Services Program has recommended that ORV baits be distributed in a 15-mile radius around locations where fox rabies cases have been reported. The 15-mile zone is a guideline based on previous ORV work done with gray foxes in Texas. The goal of the Flagstaff ORV Program is to provide a rabies-free buffer around the area where rabies has been documented and to slow down the spread of rabies among gray foxes.

The Flagstaff ORV Program will utilize an oral rabies vaccine encased into a bait coating. Extensive research has shown the vaccine to be safe for humans, pets and wildlife. The vaccine/bait units will be distributed by air in rural and forested areas and dispensed by hand in populated areas within the expanded Rabies Quarantine area. Hand-baiting is important for reaching urban areas where there may be concerns associated with distributing baits by air and to reduce the possibility of people and domestic animals coming into contact with the baits.

A detailed distribution plan has been developed to ensure consistent coverage of the target area.

When an animal finds a bait and bites into it, the sachet ruptures, allowing the animal to swallow the vaccine. Animals that swallow an adequate dose of the vaccine, develop immunity to rabies. As the number of vaccinated animals in the population increases, they act as a buffer to stop the spread of the disease to other wildlife, domestic animals, and people.

In addition, the Quarantine amendment allows for a Trap, Vaccinate and Release (TVR) Program, similar to the TVR Program used in 2001, to vaccinate skunks in areas where there has been an increase of rabies in skunk populations. The oral vaccine has not proven to provide sufficient protection to skunks. Skunks that ingest the vaccine show evidence of a much lower antibody response to vaccine relative to the percentage of other species tested. This led to the decision to use both the ORV Program and the TVR Program for the Flagstaff rabies response.

In order to allow for the completion of the TVR Program, the Rabies Quarantine has been extended until September 13, 2009 for portions of the East Flagstaff area. (A map of the area is available at www.coconino.az.gov/health) Traps will be placed in areas likely to be inhabited by skunks. The traps will be checked at least once a day and all skunks found will be vaccinated. Details regarding the TVR Program locations are being finalized.

The ORV Program is expected to begin the week of July 20 and will involve the CCHD, USDA-APHIS Wildlife Services Program, Arizona Department of Health Services, City of Flagstaff, Arizona Department of Game and Fish, Second Chance Center for Animals, the Coconino Humane Association, National Park Service, and the U.S. Forest Service.

The original Rabies Quarantine was scheduled to expire on July 7. The Quarantine extension will allow for the planning and execution of the ORV Program and the TVR Program.

• All persons within the expanded Quarantine Area who own or control domesticated dogs and cats must make sure that their pets are vaccinated and that vaccinations are up to date. Vaccinations are available from your local veterinarian.

• During the Quarantine period, a team of staff and volunteers from partner agencies will be distributing vaccine bait in selected parts of the expanded Quarantine Area and continuing public education. The Quarantine allows the Health Department and participating agencies to enter private property to place vaccine bait packets. The vaccine bait packets are not harmful to humans or animals; however the CCHD recommends that you avoid touching the packets. Additional information about the bait packets is available at www.coconino.az.gov/health. People are prohibited from interfering with the bait packets in any way. This will help to ensure that enough wild animals become vaccinated by eating the bait.

• Feeding wild animals will also be forbidden as a part of the Quarantine. This will help to minimize the opportunity for exposure to pets and humans by keeping wild animals away from homes, pets and people.

• In addition, pet owners must not leave pet food outside after sundown, and compost bins and piles must be completely enclosed.

Although many wild animals are nocturnal, it is possible for animals to be out during the day searching for food. If a wild animal is behaving in a strange manner, such as acting aggressive, staggering, or will not back away, call CCHD Rabies Information Line at (928) 679-7350.

Wild animals may not be trapped within the expanded Quarantine area limits or transported outside the area without prior written approval from the Coconino County Health Department. Do not approach a wild animal. Call the Health Department for assistance.

A copy of the revised Quarantine Declaration and a map of the expanded Quarantine area are available at www.coconino.az.gov/health.