A river runs through it - Mount Baldy 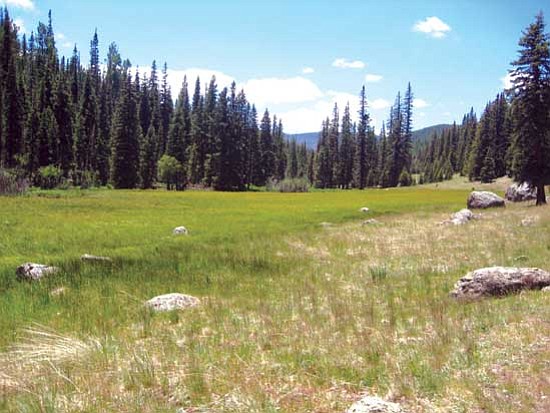 MOUNT BALDY, Ariz. - A river runs through it would describe a lot of hikes. It just doesn't usually describe a mountain hike.

But that's exactly the case on the West Mt. Baldy Trail.

The story begins in Benny Creek Campground at an elevation of about 8,300 feet.

This would not have been a big deal except that the creek, a tributary of the Little Colorado River, was running about 50 feet behind the campground and we saw something we had never seen before: aspen trees were growing in the middle of the creek. We're used to seeing aspen trees growing on the mostly dry San Francisco Peaks or on other mostly dry mountains.

Talk about picturesque. The beautiful aspens sprouting up out of the cascading creek surrounded by flowers including wild irises and something that appeared to look like a type of pink rose.

From Greer, the hiker has to drive seven miles up a steep road to reach the trailhead to Mount Baldy, which is the second highest mountain in Arizona. Less than half a mile in there was a field of wild irises. Most were the purple type, but there was also a small stand of irises that were yellow and white.

About a mile in, there is a beautiful open meadow and it's about in this area that the Little Colorado River starts running to the side of the trail. The hiker has to make many decisions about where to stop to just enjoy the river and nature or whether to move on in order to see as much of the trail as possible.

The Mt. Baldy Trail offers the hiker eight miles in and eight miles out, but Nick and I faced time constraints that limited us to six miles. That just means we have to go back another time in order to complete the journey.

There were less than 20 people on the trail at this time, but some of them were enjoying fishing for trout in the Little Colorado River. Butterflies and wildflowers also dotted the landscape near the river.

The area is plush green due to krummholz trees, blue spruce, Douglas fir and alpine grasses. About two miles in, a portion of the stream running down from the trail is filled with colorful green moss. Mule deer, elk, coyote and bear are known to visit this area, but none showed themselves on this day.

The trailhead starts at 9,200 feet and hikers will top out at 11,350. The "100 Hikes in Arizona" book says the hike takes eight hours and rates it as moderate in difficulty. The best time to hike it is from June through October. It is located in the Apache-Sitgreaves National Forest.

Hikers cannot go to the top without tribal approval because that is on Apache land and that tribe has deemed it sacred. However, hikers can get within a quarter mile of the top. The White Mountain Apache has issued some permits to allow visitors to go to the top, but without those permits packs can be confiscated.

Most of the climbing comes in the last mile of the hike.

On the way to and from Greer, the motorist passes the Sheep's Crossing trail and a walkbridge. This was particularly amusing because there was a no vehicle sign posted right by it with an X through a jeep, but there was no way a jeep would fit on this walkbridge; even a three-wheeler would probably be too wide.

The hiking trails to West Baldy and East Baldy are both found off this loop.

Out and about in Arizona: winter hiking on the Bear Springs Trail
Arizona Highways produces hiking guide
Out and about - Watershed Trail
Mt. Elden Lookout Trail offers great views and tough workout
Out and about - Green Mountain a plethora of flowers, butterflies and scenic mountain views
Event Calendar