Navajos get chance to vote on government structure 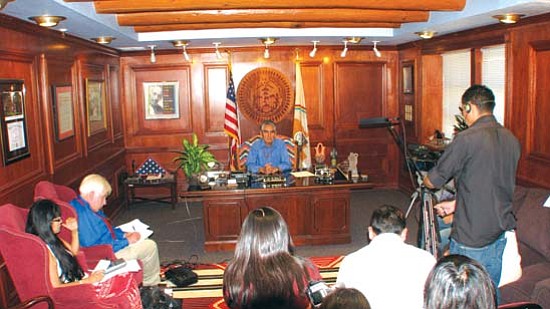 <i>Navajo Nation Office of the President/Vice President</i><br> Navajo Nation President Joe Shirley Jr. told reporters at a press conference June 29 that when given the chance to vote on two initiatives, Navajos will have their first opportunity since 1934 to decide on the structure of their own government.

WINDOW ROCK, Ariz. - Navajo Nation President Joe Shirley Jr. told reporters June 29 that when given the chance to vote on two initiatives, Navajos will have their first opportunity since 1934 to decide on the structure of their own government.

"This is the people's government," President Shirley said. "This is a government for the people. And the people need to be involved."

On June 24, Navajo District Court Judge Carol Perry ordered an election be held within six months for Navajo voters to decide whether to reduce the Navajo Nation Council from 88 to 24 members, and whether to give the president line item veto authority.

"The election needs to happen," President Shirley said. "The two initiatives need to be given to the people to vote on."

In 1934, Navajos were given their first opportunity to vote on the form of their government. At the time, they broke with the pattern of many tribes when they voted 8,197 to 7,679 to reject a tribal constitution being promoted by Commissioner of Indian Affairs John Collier. Historians note several reasons for rejection of the constitution but cite Navajo livestock reduction and the bitter feelings left by it as a primary one.

On Sept. 24, 1938, the tribe held its first election of tribal leaders, electing Jacob. C. Morgan as Chairman and Howard Gorman as Vice Chairman of the Navajo Tribal Council - and ending the right of the Commissioner of Indian Affairs to appoint delegates.

More than 50 years later - in 1989 and 1990 - following the Navajo government turmoil that resulted in the suspension of Navajo Tribal Chairman Peter MacDonald, the Navajo Tribal Council enacted Title 2 to create the three-branch government as well as the Office of the President and Vice President. The Judicial Branch had been created in 1985.

However, Navajo voters were supposed to be allowed to ratify the Title 2 amendments but the election to allow that never occurred, President Shirley told reporters.

"[Title 2] was put in place but with the caveat [that] we need to take it to the people within three years, and the people need to know what we've done, and they can either acquiesce or reject what we've done," he said. "If they reject, we have to go back to the drawing boards and they'll let us know what to do."

He said whether Title 2 and the actions of the Navajo government since then are actually legal is still questioned by some.

"The people haven't passed on it, so is it still legal?" he asked. "Now, if the people vote on the size of the legislature, they'll be through and through legal. Because at least that portion of the law the people acted upon.

"And if the people give the line item veto authority to the presidency of the Navajo Nation, that portion of the law certainly will be as legal as legal can be, in my mind's eye, because the people had acted on that."

Asked about improving accountability of Navajo government through the two initiatives, the President said, "Certainly the Navajo people deserve to know what is going on with their government.

This is not only relevant to the two initiatives, but all the time. And I think to the largest degree the leadership of the Navajo Nation government needs to be looking at ways to get the people more involved."

President Shirley said one initiative calls for reducing the council to 24 delegates because that was number selected by Navajo voters in a Sept. 5, 2000, referendum. More than 70 percent of those who voted - or 22,081 - said yes to reduce the council. However, because the referendum law requires a "supermajority" - a majority vote in each of the 110 chapters - rather than a simple majority of total voters, the referendum failed.

Asked what kind of majority would be required for the initiatives to succeed, President Shirley said only a simple majority is needed.

An April 29, 2008, a legal opinion by Navajo Nation Attorney General Louis Denetsosie found that a ballot initiative would be valid with a simple majority vote of the people.

The opinion examined the question of whether a majority vote in every voting precinct, or supermajority, would be required for an initiative brought by the people to succeed.

The attorney general's opinion said no, that a simple majority of 50-percent-plus-one vote of the electorate applies to an initiative of the people. The opinion was based on the Fundamental Law of the Diné, Navajo Nation Supreme Court rulings, and the intent and actions taken by the Navajo Tribal  Council in 1989 to forever prevent the concentration of power in the hands of one individual or one branch of Navajo government.

"There is an unjustified belief among the voters that the Diné cannot amend (specific provisions of the law) because of the supermajority requirement in the procedure component," Mr. Denetsosie wrote. "The basic issue is whether the Navajo Nation Council can impose draconian procedural requirements on the right of the Diné to make their own laws. The supermajority requirement contained in (the law) is inconsistent with this right, and the Navajo Nation Council cannot supersede the right of the people to make their own laws and establish their own form of government."

When asked whether reducing the size of the council would result in loss of representation of the people, President Shirley said no. Navajos, as well as other Arizonans and New Mexicans, are already represented by only two U.S. senators in each state and are adequately represented in Congress.

"We have that kind of representation already and we're still being represented," he said.

A 2001 report commissioned by the council titled Lawmaking and Oversight Efficiency Study; Increasing the Efficiency of the Navajo Nation Council and Standing Committees found that in 2001 Navajo Nation delegates represented an average of only 2,100 constituents - or about 26 times fewer constituents than those represented by Arizona legislators but at 30 percent more cost per legislative item.

Reducing the council to 24 delegates would still equate to 13 times the representation per constituent than the Arizona Legislature, and per capita the council would remain one of the highest levels of representation of any legislature in the country.

Asked how the initiatives would curtail the misspending of tribal funds, President Shirley said the council often appropriates funding without first consulting with the President's office.

"I think a lot of the monies need to be put out there where the people are," President Shirley said. "And also into the services which are really needed. I believe at this time we are not really doing that and we need to be doing that."

He cited as one example the use of $50,000 to purchase gold rings for delegates, although not every delegate accepted one.

Asked what needs to happen next, President Shirley said Navajo voters at the chapter level need to be informed of the initiatives and the reasons for them, and the council needs to settle on a redistricting plan that incorporates 24 delegates in the event Navajo voters opt for that.

"Certainly the people are being given the option to retain the size of the current council for one," he said. "If they vote no on the initiative and the no wins, the size of council ... is retained."

Asked if he thought the initiatives election would now be blocked by council, he said it hasn't happened so far, one week after the judge's order.

"When the people are moving, it's hard to stop that, and I think this is such a case," President Shirley said. "Sometimes as leaders we don't agree with things, and because we don't agree we try to get in the way, try to have it not happen, or we try to take it in a certain direction. I really don't see the council doing it at this time, but I hope the people, at the end of the day, will have spoken their concerns."