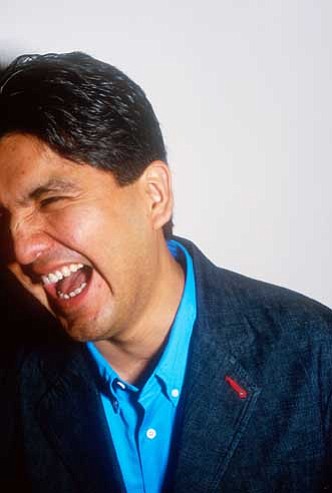 Sherman Alexie will present "Without Reservations: An Urban Indian's Comic, Poetic & Highly Irreverent Look at the World” at Northern Arizona University on Feb. 24 at 7 p.m. in Ardrey Auditorium.

When Sherman Alexie was in high school, he found his mother's name written in a textbook assigned to him. Frustrated with the lack of educational resources, Alexie decided to leave the Indian Reservation to receive a better education.

The Spokane/Coeur d'Alene Native American went on to become a poet, author, comedian and filmmaker.

Alexie will present "Without Reservations: An Urban Indian's Comic, Poetic & Highly Irreverent Look at the World" at Northern Arizona University on Feb. 24 at 7 p.m. in Ardrey Auditorium. As part of the NAU Speaker Series, "Voices to be Heard," Alexie will talk about overcoming the odds as a Native American.

"Alexie really speaks to the emotions of people that aren't 'on the inside,'" said Cynthia Kosso, chair of the Department of History and organizer of the event. "He makes success real to minority populations because he came from as tough a situation as any of them."

Alexie has published several poetry collections, including "The Business of Fancydancing and I Would Steal Horses." He has published short stories, such as "The Lone Ranger and Tonto Fistfight in Heaven," and novels, such as "Reservation Blues" and "Indian Killer." Alexie has also written two screenplays, "The Business of Fancydancing" and "Smoke Signals" (with Chris Eyre.)

His most recent honors include the 2008 Scandiuzzi Children's Book Award for middle grades and young adults, a Washington Book Award; a 2008 Stranger Genius Award; the 2008 Boston Globe-Horn Book Awards for Excellence in Children's Literature in Fiction; and the 2007 National Book Award in Young People's Literature for his young adult novel "The Absolutely True Diary of a Part-Time Indian." Other awards and honors include the 2007 Western Literature Association's Distinguished Achievement Award and the 2003 Regents' Distinguished Alumnus Award, Washington State University's highest honor for alumni.

The event is free, but tickets are required. Please call 928/523-5661 for tickets. A book-signing will be held in the lobby after the presentation.