Wildcat boys, girls win a pair on the road 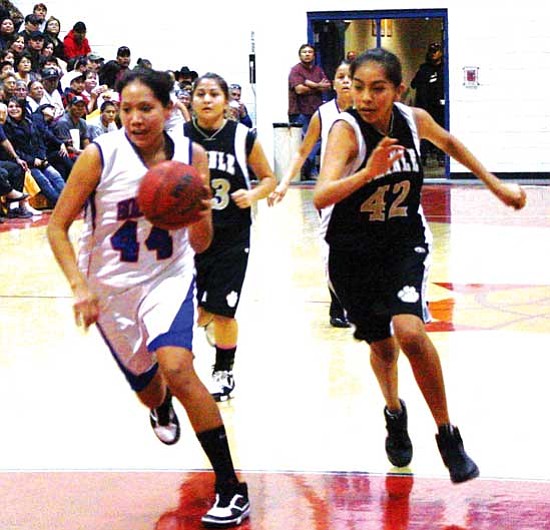 <i>Photo by Anton Wero/NHO</i><br> April Lester (44) of the Holbrook Lady Roadrunners drives full court after a steal. In hot pursuit is Chinle’s Tia Dalton (42). The Lady Wildcats eventually won the important contest with a final score of 57 -45.

HOLBROOK, Ariz. - Before a sellout crowd at the Tony Munoz Gymnasium, the Chinle Wildcats boys and girls basketball teams won two important class 3A North Region contests against the Holbrook Roadrunners. The boys extended their winning streak to five games with a final score of 74-65. The Lady Wildcats were victorious with a final score of 57 to 45 over the Lady Roadrunners following a win over the Monument Valley Lady Mustangs the previous evening, 56-50.

As expected, the Roadrunners - behind the trio of Tatton Long, Jerel Dixon and Tyler Stingley - quickly set the tempo of the game, grabbing a quick 7-0 advantage.

"We expected an up and down floor type of a game [but] they came out shooting. They got a lot of good players, good shooters, so we adjusted to that early on," said Chinle head coach Ned Curley.

With 2:00 gone in the first period of play the Wildcats' Denzel Harvey ignited a 15-3 run with assistance in scoring from Mathius Claw, Daron Brown and Koyai Clauschee to take a brief 15-10 lead. Kyle Cummings hit his second three ball of the opening quarter along with two free throws by Stingley and a trey by Brian Hansen with six seconds on the game clock. The Roadrunners took back the lead 18 to 17 as the opening period ended.

The one-two punch of Harvey and Claw, plus the zone press defense of the Wildcats stymied the Roadrunners in the second frame. With the duel's 6-0 run, the Wildcats took command of the game for good. The Wildcats outscored the home team 21 to 4 and led 38 to 22 at intermission.

The teams traded bucket for bucket in the third quarter. Holbrook was able to outscore Chinle 17-15, but still trailed 39-53. Six different players scored for each team in the fourth and final frame as the Chinle Wildcats coasted to a 74-65 win. With the win, the Wildcats improved to 17-4 overall, 6-2 in conference play.

Mathias Claw had a game high 21 points for the Chinle Wildcats, Denzel Harvey and Brandon Yazzie each scored 16, while Koyai Clauschee contributed 10 points.

"We had a good second quarter. Our zone defense worked to perfection," Curley commented. "We got on their shooters and challenge their shots, boxed out, release and transitioned to our offense as quickly as we could and we got a good win."

"We didn't adjust defensively. We knew we had to stop Denzel and Mathias, [but] we didn't do a good job," said Roadrunners' coach Raul Mendoza. "We were tentative and didn't attack the zone like we wanted to. Because of that, we didn't focus on our shots [and] as a result, we got behind and weren't able to make up the difference."

Behind Tia Gorman's eight points, the Chinle Lady Wildcats scored 13 points while holding the Holbrook Lady Roadrunners to ten points in the opening quarter. Gorman continue to score at will in the second quarter and outscored Holbrook 16 to 11 for a 29 to 21 advantage at the half.

Six Lady Roadrunners combined for 16 points, including a 10 - 0 run midway through the third quarter and the Lady Wildcats scored 14 markers. Chinle held onto a 43 to 37 lead going into the final period and held the Lady Roadrunner to eight points as they put up 14 more points and coasted to a 12 point win with a final score of 57 - 45.

Tia Gorman led all scorers with 29 points, followed by Nichole Tsosie with seven, for the Chinle Lady Wildcats, who now boast a 15 - 7 overall, 5 - 4 conference play record.

"We stopped them with our defense. We applied pressure and didn't allow them any looks in the beginning," said Darrell Clauschee, Chinle Lady Wildcats' coach. "I was pleased with all the girls. They each contributed in their own little way [and] I am happy with that."