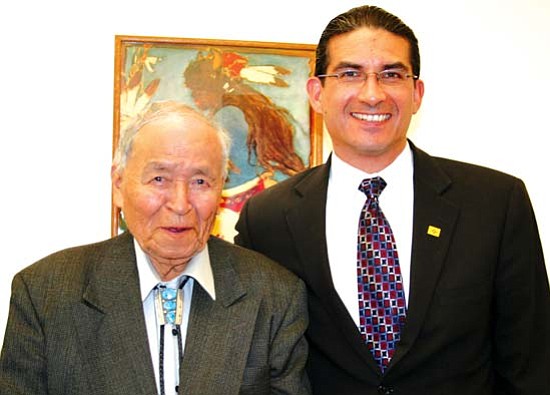 SANTA FE, N.M. - The State-Tribal Collaboration Act was introduced on Jan. 22 by NM State Senator John Pinto. Senate Bill 196 would create a statute for effective government-to-government communication and collaboration between the state and tribal governments.

"Since taking office, I have made it a priority to strengthen the relationship between the state of New Mexico and our sovereign tribes," said NM Governor Bill Richardson. "The State-Tribal Collaboration Act will further my commitment to Native Americans and provide greater consistency ... in working with the 22 tribes, nations, and pueblos in New Mexico, and will ensure productive government-to-government relationships continue into the future."

"SB 196 will require cabinet-level agencies to develop policies that promote communication and collaboration between the state and tribal governments. Training would also be provided to state employees so they can work effectively to address Native American issues," said Senator Pinto. "This is a very meaningful and exciting legislative proposal and something we've worked toward for a long, long time. I am honored to sponsor this landmark bill."

The Interim Indian Affairs Committee has endorsed the bill and there is strong support from the All-Indian Pueblo Council, the Navajo Nation, the Mescalero Apache Tribe, several individual Pueblos as well as the New Mexico Commission on Indian Affairs, the Bernalillo County Off-Reservation Indian Health Commission and the Albuquerque Indian Center.

As stated by Isleta Pueblo Governor Robert Benavides, "This act will improve direct tribal communication with [Governor Richardson] through an annual summit with tribal leaders, and will further develop tribal communication and collaboration policies by state agencies. The State Tribal Collaboration will enhance reporting on Native American programs administered by the state, and will support the continuation of state agency tribal liaisons in their vital role."

"Strengthening and expanding collaboration between the state and tribal governments through SB 196 will result in better coordination of resources to address shared priorities as well as higher quality services to our more than 200,000 Native American citizens," said Indian Affairs Secretary Alvin Warren. "The 'State-Tribal Collaboration Act' promises to set another significant milestone in our shared state and tribal endeavor to foster positive government-to-government relations that will benefit all New Mexicans."