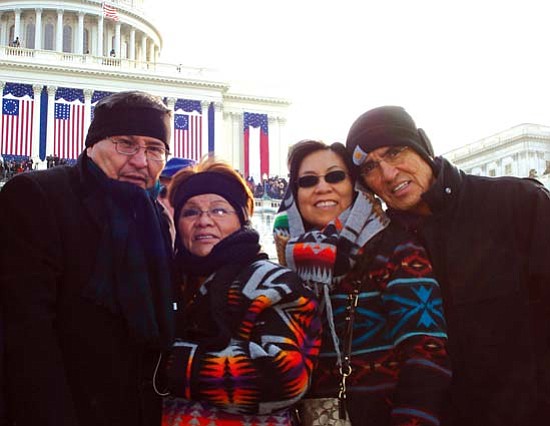 The Navajo leaders and their wives arrived in Washington Jan. 18 for the beginning of the inaugural events and concluded their visit at the Commander in Chief Inaugural Ball Jan. 20 after the arrival of the new U.S. President and First Lady Michelle Obama.

President Shirley, expressing the sentiment that he was experiencing "history in the making," said his "hope and dream is to get the stimulus package passed and get jobs to Native people and Navajos."

He said seeing the first African American become the 44th U.S. President brings to mind the teaching of Navajo elders that "there are no impossibilities in life, that as children of the Holy People we are part holy ourselves."

"There is hope in the world that we can do it by working together, praying together," he said. "The Navajo Nation supports President Obama. Now we need to get to work on the stimulus package, and certainly we need to get our own people working, too."

Salazar said the NCAI meeting was the only one he accepted before assuming his new job.

"There's great hope and great expectation," he said. "We also know it's going to take a tremendous amount of resolve."

He was greeted with enthusiasm by dozens of tribal leaders and hundreds in attendance.

"We have to make sure that never again ... like what has happened in the last eight years, that never again are Native American communities of the United States of America left outside the tent," Secretary Salazar said.

One of the first things to work on is the trust litigation that has been going on for decades. He said it would be "a very high priority issue for me."