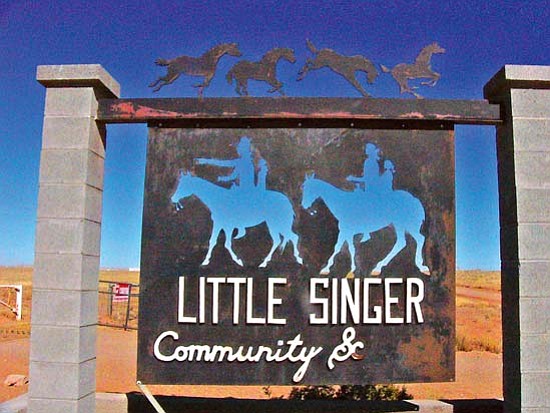 BIRDSPRINGS, Ariz. - Classes may have been cancelled at Little Singer Community School on the day that Birdsprings bade farewell to beloved elder, Benny Singer Sr. - but the sound of children's laughter filled the air nonetheless. Considering its history, that is only natural.

Decades ago, Singer's father - the medicine man known as Little Singer - noticed "an unnatural silence" within the community. Gone was the laughter of its children, who were sent off the reservation to receive elementary and high school educations. Many lived in boarding schools.

This spurred the medicine man to approach his community for support to bring those children back into the community - and his family, friends and neighbors responded wholeheartedly, creating the small but distinctive school.

Singer loved the school his father dreamed of and fully supported that dream throughout Little Singer Community School's incorporation in 1978 up until his recent hospitalization.

The school is situated on land donated by the Singer family from its own customary use area, and Singer's home is within easy walking distance.

The school feels more like a family camp - visitors are welcomed whole-heartedly, volunteers and family members move about the classrooms and library, and community events are held in the dome-shaped gymnasium.

On Jan. 16, Benny Singer's family and friends - an estimated crowd of 400 - packed the dome to share a meal and remember the beloved elder, who passed away on Jan. 11. He was 81-years-old.

Etta Shirley, who serves as principal at Little Singer, remembered Singer for his good humor, something testified to by others throughout the day.

"He was so attached to the kids. He would be at home and hear the children's laughter," Shirley said.

"Even though he was weak, he would walk over to the school. He was always telling stories-Coyote and Winter Stories-and he always sang what he called 'The Children's Song.' When he arrived on campus, he went to every building and he would greet everyone. He came to all of the games to watch the kids."

The school population includes Singer's children and grandchildren, whether they are staff members or students, Shirley continued.

"He was a visionary, statesman, and spiritual leader," Walker said. "He has shown me kindness, wisdom, courage and foresight. When I think of Benny Singer, I remember the early days of Indian Self Determination beginning in the 1970s when tribal governments and communities could begin to contract with the federal government for [education]. Today, we can contract for other services such as law enforcement and health services. We've matured in our ability."

But Walker explained that during the struggle to achieve self determination, Singer and other community elders were there to step up to the plate and fight for those rights.

Walker, who serves on the school board, said. "It is incumbent on all of us to grow into the shoes of those wise elders-I'm sure that this has been Benny's expectation for years.

"On a personal level, Benny was a humorous man. He delivered a lot of teasing and playing with words; but his teasing would tell you something-you knew to wise up and be advised," Walker continued. "After the teasing, he would move on to talk about serious ideas, concerns and issues. He advised me many times over in my work within the community. He respected his tribal leaders, and didn't put them down or try to second guess their decisions. Last fall, when I visited him ..., he shared with me how he looked up to community leaders. Those few words meant a lot to me as a council delegate-where an elder that you respect tells you that he looks up to you."

"Benny Singer was fun to be around," said Mark Sorensen, who served as director of Little Singer Community School for many years. "He had a way to bring people in to help his community. He always called me 'in-law.' Those of us who've lived our lives with the Navajo know that the duty of an in-law is to help his family out."

Though Sorensen was an honorary in-law, he took his bestowed status seriously.

"He used to tease me by saying, 'I hear voices all over the reservation calling for their daddy,'" Sorensen continued. "Later, I thought about that more deeply and realized that he was a wise man-that what he was teasing me about was something deliberate. If I feel that the kids on the reservation, in the schools that I've worked with, are my kids-and I do, even though I know they are not mine alone-the more I will want to do for them."

Sorensen said that he encouraged people at Singer's funeral to think about the ways that Singer teased them.

"His teasing was a way of getting people pulled in through humor to help him out-not for personal gain-but for helping the community and school that he loved," Sorensen concluded. "I think of him as a wise man and honor him for using humor as a way to get things done."

Singer received formal recognition for his work with the schools when he was named the Navajo Culture and Language Parent of the Year by the Department of Diné Education of the Navajo Nation on Oct. 3, 2007. Little Singer also honored the elder by establishing Benny Singer Day that same year.

Singer's grandson, Little Singer Martinez Wagner, took time out from serving food and drinks to address the crowd. "I would like to welcome all of you," Wagner said. "Thank you for being with us, the family of my late grandpa, Benny Singer.

"We remember him for the many things he has done for the school, and the many things he shared with us," Wagner continued. "We would like to honor him for coming into the classrooms-like teaching the seventh and eighth graders how to do the Yeibicheii dances, and for the lower grades, he always told stories of the past. He told us to respect each other and love one another, and not to talk back to people, especially our elders. We are all going to truly miss our grandpa. But as we walk the campus, we will remember him for the wonderful person he was."

A banner hung prominently near the front of the gymnasium proved to be prophetic. It read, "January Theme: A Season of New Beginning."

Singer was trained by his father, Little Singer, and was a known and respected practitioner of the Yeibicheii, Blessing Way, Five Night Ceremonies and other healing prayers and songs.